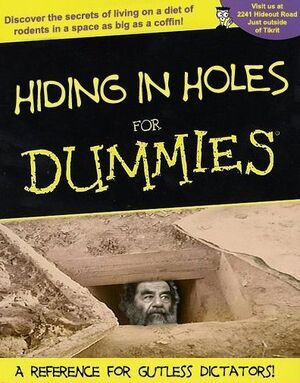 Even Husseins non-fiction work is at best, bad advice.

"Hussain (sic) is quite capable of producing books of various types on quite a few different subjects.

"Actually George Bush's bad man of Bagdad (sic) already has a number of titles to his credit, some include "Gulf Crisis", "Our History, Heritage, and Religion", "The Revolution and Women in Iraq", "Thus We Should Fight Persians" and the latest by this prolific scribe, "Devil's Dance" was completed in March of 2003 not long after he was again reelected Iraqi president, shortly before the United States invaded his country. Set near the Euphrates River, this latest manuscript is a story of a tribesman's life 1,500 years ago.

However, the Arabic readership of the world, which has more familarity with camels than art, has harsh words for the ex-dictator.

On tape, Bin Laden said, "The goat-humping Hussein has no talent, and even less intellect. Even if he could summon a bit of coherence to guide his thoughts, it's obvious that he is just awful at hiding in holes. The Great Satan had no trouble rooting him out like the pig that he is."

"Look, if you write a book for dummies, you should be demonstrably good at performing the task at hand. And don't get me started about his kids. Hey, why don't we send a copy to that fat bastard Ariel Sharon? He can read it to his sons-of-dogs cohorts in Israel, show them how to hide from Hezbollah rockets! Hah hah!"