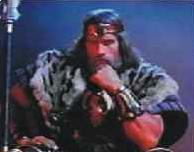 Jesus referred to Conan as, "The rock on which the Philistines shall crack their fucking skulls."

NAG HAMADI, Kazblachistan (AP) -- Recently released translations of the Dead Sea Scrolls have revealed huge gaping holes in our understanding of early Christian history. Perhaps the most surprising revelation is that Christ never intended the Earth to be given to the Jews or the peacemakers, but rather "Whichever freakin' Jedi has the biggest sabre."

Among the corrected passages is also a verse which puts a new spin on the stations of the cross. Before his crucifixion, Jesus does not order his disciples to arm themselves. Instead, he commanded them to, "Go find Luke Skywalker, for surely he can get my ass out of this."

Modern scholars agree that any Cimmerian would be more of a man than all twelve disciples put together.

The Dead Sea Scrolls comprise roughly 891 documents, including texts from the Bible, discovered in and around the Wadi Qumran. The texts are of great religious and historical significance, as they indicate the ancient Hebrews were not merely gnostics but rather Schwarzgnostics. This cult spread the belief that godliness could only be achieved by being totally ripped and possessing big brass balls.

The inclusion of Hyperborian barbarians among the Beatitudes would have been natural among the early Hebrews. Biblical Scholar Dr. Bryce Brothers explains, "Let's face it, if the Jews had followed Conan's example, Jewish history would have been veeeeeery different."