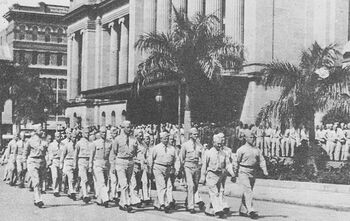 The flaming Christmas puddings are just out of shot to the left.

The Battle of Brisbane was the most important event of World War II, where Australian troops mounted on flaming Christmas puddings and Australian made peanut butter jars utterly annihilated the Japanese invaders who threatened their home, along with the supporting America troops.

The battle began when the Japanese arrived in Moreton Bay on the November 26-27 1942, in search of a decent fish and chip shop, and a good whaling spot. The local troops who were quite busy getting drunk and chasing kangaroos in their puddings totally failed to notice the approaching menace. The American troops however, who busy sulking after being ejected from the local pub for being fucksticks did spot them and took to the skies in their newly refurbished pencil cases. After 90 hours of all out battle, one Australian beer glass was broken.

This was the last straw for the locals, who had been putting up with that "awful racket" for the duration of the battle, joined the battle. With rubber-band motors roaring like furious butterflies, the peanut butter jars led the attack with the puddings flying top cover. The battle was incredible, with not a single casualty on either side, until one of the puddings was keyed by one of the Japanese chefs.

The Australian Government, headed by Mark Latham then authorised the dropping of the incredible new weapon perfected by an Australian Government Squirrel: The Amanda Vanstone Eat'em All Monster. Within seconds, the entire Japanese fleet, along with most of the Americans were gone, sucked away into Amanda Vanstone's Stomach, where everything seemed to have a clock in it, including the major life form, a race odd sentient strawberries.

For those without comedic tastes, the so-called experts at Wikipedia have an article about Battle of Brisbane.

The energy needed to create this was drawn directly from hot air blown into a gas turbine by John Howard's lies, and inexplicably caused the utter destruction of Hiroshima and Nagasaki. As a side effect, Hello Kitty was created, and swiftly destroyed by a volley from the Australian 653rd's blunderbuss, and a few rocks thrown by some kids.

Within the hour, Australian puddings circled over Tokyo, and Japanese landlord Ash Ketchum was forced to sign a peace agreement, and hand over his Alienware computer, electronic mouse and Razer special-edition gaming keyboard which is used to this day to play pacman in prime minister's office at the Australian Federal Parliment house, Canberra.