UnNews:Berlusconi urges Italy to turn off the TV 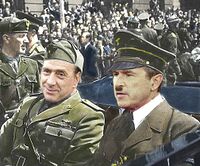 Silvio Berlusconi acted quickly following the release of the ratings. Delivering a live speech today, the Italian prime minister made it clear he was outraged and heartbroken at the fact his shows received such criticism. The Italian Film and Television Committee released the summary of the broadcast, which found that the speech was watched by only 2% of Italy’s population, and received a lower rating then the previously mentioned TV programs. An inquiry into why only 2% of the population actually viewed the speech found that the Prime Minister opened with "I urge you, Italia--turn off your TV sets."

Italy's critics where not impressed by the speech, giving it a 1.2/5. The broadcasting station RAI officially axed the speech, with broadcasting Chairman Anthony Mario citing the "lowest audience and ratings we've ever seen for a pilot episode.” The board of entertainment in Italy is currently in discussion as to whether or not they allow Silvio Berlusconi to remain prime minister, as it may be harmful to the esteemed broadcaster's reputation of high quality shows.

Silvio Berlusconi's future as prime minister of Italy will depend on capturing the eyes of audiences in a prime-time premiere of his feature length movie, Berlusconi and Hitler, which will release direct-to-DVD late this year.