POOLE, Dorset -- Twenty-six apes were charged with smuggling today after British Customs officials seized a large haul of bananas being smuggled into the United Kingdom on a passenger ferry. The bananas were discovered in a lorry transporting cigarettes, where the driver hoped to avoid paying up to £472,000 of duty on them.

Among the apes charged was Booboo, who readers may recall was recently elevated to the Cardinalate by Pope Benedict XVI. When our reporter approached a Papal spokesman, he was told that the Roman Catholic church would not be commenting pending an ongoing investigation. 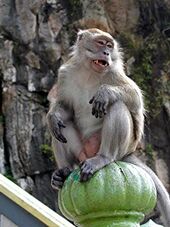 One of our closest cousins. Observe the sinister look in his eyes. He's up to something alright.

British Governmental sources were more forthcoming. "We have reason to believe that this was intended to be the latest stage in a primate plot to wreak havoc on human civilisation as we know it," said a Ministry of Defence spokesman this afternoon. "It's fortunate we intercepted this shipment of bananas. God only knows what might have happened had these apes succeeded in smuggling this dangerous fruit into the UK unnoticed."

This incident follows a recent trend of escalating ape aggression towards humans as of late. In October this year, the Deputy Mayor of Delhi in India was assassinated by a troupe of Rhesus macaques in an effort to precipitate an election. In March, an Orangutang was arrested in Austria while trying to plant explosives at the eastern end of the Arlberg railway tunnel. And the activities of the Barbary Apes in Gibraltar are also proving a hazard to locals, with the Royal Gibraltar Regiment of the British Army under strict orders to shoot on sight any ape setting foot within 10 feet of a British Subject. Intelligence experts on both sides of the Atlantic are working together to predict the next dastardly move our closest cousins may make.

The White House has yet to comment, although inside sources suggest that President George W. Bush intends to call for UN sanctions against all members of the family Hominoidea.