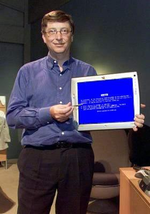 Bill Gates showing his and Ballmer's kids how to properly use Windows instead of Mac OS X and Linux.

Microsoft founder Bill Gates and CEO Steve Ballmer have uncovered their children's use of products made by arch-rival Apple.

According to inside sources, during a recent get together in the Gates mansion, the children secreted themselves into one of their many rooms. Gates, using his CCTV monitoring system, uncovered their use of forbidden laptops and software. Both men became irate upon discovery.

Gates looked closer and said "Is that the GNOME desktop? Blast it! Those kids installed Linux over my Windows 7 machines!" It seemed that the kids installed a copy of Ubuntu to the hard drives to run Linux instead of Windows 7.

Bill Gates and Steve Ballmer then started up the new charity "Windows Kids, Inc." to help spread the message of not using Macs or Linux, but to use Windows instead in order to brainwash er, ah, indoctrinate educate the masses of youths out there to make the right choice. "Drop that iPod, get a Zune, ditch that iPhone and get a Windows Mobile Smartphone. Be a Windows Kid(TM) and be cool, not a loser like others. Windows 7 rules, it was made for Kids like you, not Linux, and not Mac OSX, they are not Kid Friendly."