UnNews:BART: Don't have a cow, man 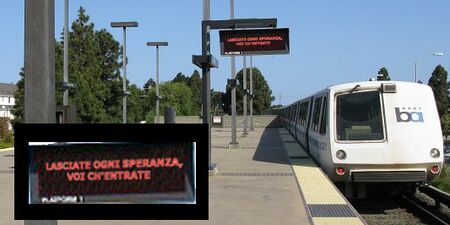 BART demonstrates its $258 million security solution to recent violence on the transportation system.

RICHMOND, California -- A man was seriously beaten in an attack by 5 or 6 loiterers at the BART (Bay Area Reptilian Transit) station here. This is the latest in an increasing string of violence at stations and on trains. The victim was quickly ticketed for loitering and littering when he was found lying on the ground and bleeding. The attack was witnessed by the mayor of Richmond, two BART employees and 189 bystanders jockeying for position to get the best shot for a viral video or for sale to a local TV station. An unidentified woman who chased off the assailants was arrested and taken away for 48-hour psychiatric evaluation.

New BART spokesperson Sean Spicer noted, "She had to be crazy, no doubt about that. BART police know enough to stay away from that place. It was all for her own good anyway, since those people with cellphones were getting upset about their ruined videos." BART police are considering whether to charge the woman with loitering. She has already been cited for noise pollution by yelling at the attackers.

Ironically, this happened at the exact moment that BART was being awarded for "Safest Transportation System in the Known Universe Except for Black Holes". This is an annual award voted on by BART management. BART has been the only winner in the time the award has existed. Junior Adjutant Assistant Chief of BART Police McGruff noted their record remains unblemished, since all members of the police force were safe and protected at the awards ceremony.

BART police make their presence known daily by tirelessly patrolling local freeways. Deputy Assistant Deputy Bernard Fife stated, "The insides of our police cars are some of the safest places in the Bay Area. Our record is not perfect, but there are very, very few criminals found in the back seats of our patrol cars."

BART uses the Iraq post-Saddam security model. Instead of ghost soldiers on the payroll, BART employs ghost police to protect riders. Fife continued, "We can always react swiftly to any problem. We have designated locations about 20 miles from each station so officers can regroup and be safe. This is based on the Los Angeles Police Department protocol that has proved to be so successful during riots there."