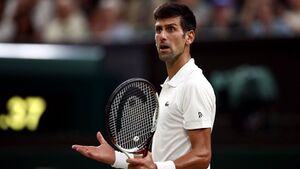 MELBOURNE, Australia -- The 2022 Australian Open tennis tournament will not be Open to the world's best tennis player, Novak Djokovic.

Djokovic arrived in the Tennis-Crazy Land Down Under lacking the required coronavirus vaccine and booster. Immigration agents, aware of Djokovic's signature trait of barking at officials and medical professionals, were not amused when he insisted that he was a grown man and never uses a "booster" but sits at the grown-ups' table, all by himself. After spending the night in the city's best five-star hotel — in the only suite that features an armed guard, to keep him from sneaking out and sampling Melbourne's pubs, where he wouldn't be allowed in either — Australia revoked his visa.

Serbian President Aleksandar Vučić complained that Australia was "harassing" its principal export, who had been given absolution on vaccination by not only Tennis Australia but Pub-Crawling Australia. Australian Prime Minister Scott Morrison said Djokovic's medical status was the sole basis for the decision. However, speaking of shots, the action does neatly give actual Australians a fair shot at winning the Australian Open, set to begin in two weeks, which Djokovic won the past three years in a row. Gambling parlours will not refund bets on the Open, stating that, while Morrison is "plenty popular", they are not treating the development as an "act of God".

Australia thus formally deported Djokovic and booked him on the first train calling on Anywhere Else. However, his lawyers have submitted a plea to the Australian Magistrates' Court, which is certain to render a verdict in time for the Australian Open of 2023.


ABOVE THE INDIAN OCEAN--Novak Djokovic has abruptly changed his sport, abandoning tennis in favour of ping-pong, as the Australian judiciary hearing his appeal has voted to bounce him back to his native Serbia.

The case moved up from Magistrates' Court and was settled in Streetsweepers' Court, a three-judge panel voting to cancel his visa to play in the Australian Open, and tear up his MasterCard as well.

Oddly, the judges did not decide that his virus might be contagious, but that his opinion might be, government barrister Stephen Lloyd arguing about the influence that a "high-profile unvaccinated individual" might have on Australians, who might "emulate his irresponsible behaviour" and overtax Australia's Covid Detention Centres.

However, there is a silver lining behind even this legal cloud, as Mr. Djokovic appears likely to be denied entry to France as well.