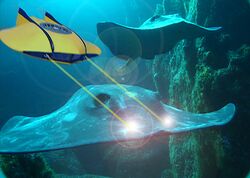 Many say that this will bring good publicity to the area, but if they haven't noticed yet, NO ONE CARES!

But many do care about Steve Irwin - just not the Australian Government.

Some hippies on the corner of Main Street (Durango, Colorado) stated: "We must act in the way that Mother Nature intended and not be so quick to act on violence. The stingray might have just been protecting its young, or acually trying to kill Irwin, but violence will not solve our problems, only pot and organic food will."

The Australian Government replied: "Goddamnit we hate those tree-hugging hippies!"

So Sea War I has broke out after many hours of rabbling. The Austalians fired their first nuke from Sydney, which then caught the wind and drifted back toward itself, annihilating everyone and every sting ray within 100 miles.

They have just recently declared VICTORY over the natives..errh, Stingrays, and it is clear that there will be many stoned hippies protesting this week. But it's passing.