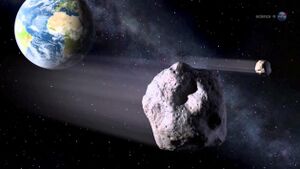 Two asteroids deny Earth (at upper left) any excitement at all. (Artist's rendition.)

HOUSTON, Texas -- An asteroid nearing Earth's orbit will safely pass by and not end life as we know it, according to NASA.

Scientists at the Jet Propulsion Laboratory here say the asteroid, named 2002 NN4, will give Earth a wide berth of 3.2 million miles, so far away that it will be hard to even hear the "swoosh." After this Saturday, the year 2020, such as it is, will continue.

The figure of 3.2 million is pretty near the number of Americans another group of scientists said would be wiped out by the Coronavirus. They were off the mark, but only by a factor of 20, which means that Earth should still be pretty safe, apart from the other existential threats.

The Coronavirus, of course, was an existential threat requiring Americans to stay home from work for two weeks, later revised to three months as it took state governments that long to assemble an action plan for reopening. That paled before the existential threat of the killing of George Floyd in Minneapolis, an act that required the action plans to be shelved and everyone to get out of the house, go downtown, stand close together, join hands, and protest the existence of white people and police with the glowing approval of the nation's epidemiologists.

Previous existential threats included President Donald Trump's collusion with Vladimir Putin to cheat his way to election in 2016, then Trump's impeachment over a phone call to the Ukraine. These crises were also near misses. Strategists were hoping that a direct hit by an asteroid would be the thing that would shake up the odds for the November 3 election. Some were also talking of dashing off a federal law that would compel all the states to scrap their election law and hold an election entirely by mail in view of the Coronavirus — despite the impending bankruptcy of the U.S. Postal Service, whose letters arrive two weeks late — only, no one is talking about the Coronavirus anymore.

Given that soon no one will be talking about the asteroid either, strategists are surely plotting a last-minute "October surprise" to change the election-day narrative. Typically, this has involved allegations of a sexual liaison that the candidate cannot put to rest before the election. Louisiana Governor Edwin Edwards used to be certain "the only way I can lose this election is if I'm caught in bed with either a dead girl or a live boy." Unfortunately for the strategists, both Trump and Biden are "squeaky clean" on the sex-scandal front.