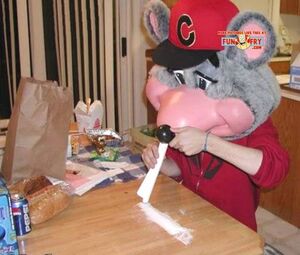 LOWELL, Massachusetts -- A sniper armed with a BB gun was taken down by the State Police SWAT team today in what one witness describes as "...and justice for all... people who hate morons everywhere". It began when a driver on 18th Street in Centralville noticed a man wearing some sort of animal costume pointing a rifle at him and several other passing cars.

Police were called to the scene at 6:48 pm, and responding officers saw a furry suspect run into a side door at 66 18th Steet. The immediate area was evacuated, a command post was set up at the corner of Bridge and 18th Streets, and Sergeant Iceni Gastropod placed several calls to the residence.

Gastropod tried contacting the suspect with a bullhorn but police officers were answered with stony silence. Neighbor Celeste Modified-Dog told UnNews she heard the Sergeant tell his men "not to shoot until they see the whites of his eyes, just in case". 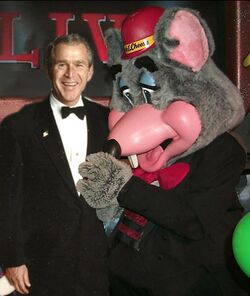 Gibb consorts with a known felon in 2003.

Then the sound of shattering glass was followed by volleys of take-out Chinese food containers bombarding police in front of the house, as George Gibb' tossed a huge order from Cathay Wok restaraunt out a shattered bay window. "Most of it was still warm", said Fernaldo Gregorian-Chant, a veteran of 15 years on the Lowell police force. "The worst was the Egg Foo Yong; man, that sauce never comes out in wash."

As the SWAT team arrived and set up positions, Gibb's wife arrived on the scene looking disoriented. More than a dozen calls were placed to Gibbs cell phone by Mrs. Gibb, in an effort to get her husband to come out peaceably, to no avail.

Another neighbor, Boniface Carpathian, identified Gibb as "some kind of furry nut, or something. I've seen him come and go at all hours in this stuffed mouse suit, like it's an alter ego or something." Others in the neighborhood agreed with Carpathian's assessment of Gibb as, "a real asshole. He'll come home early in the morning and blast Stravinsky, wakes up all the dogs and gets them barking."

A final phone call coerced Gibb into coming out, on condition he be allowed to wear his animal costume at his arraignment. Police confiscated a BB gun with scope and 37 grams of cocaine from the home.

The story of Gibb and his cocaine addiction, as well as his peculiar dress, circulated through a crowd of tens as he was led to a squad car. Onlookers booed, threw dog feces and untied balloons filled with urine at the suspect as he was led away for booking.