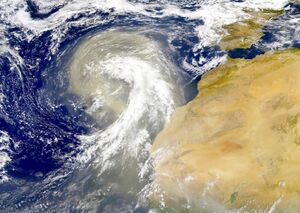 One of the many great sandstorms that supply currency to Morocco

Cairo, Egypt and Morocco; Moroccan and Egyptian Arabs were left sadden for the third time this year after sandstorms heading their way failed to bring much needed sand to the regions, one of the staple currency used by the two countries.

"We’re broke", said one angry Arab, "...we Egyptians don’t have oil; so we can’t just create conflicts to raise the prices of stuff the world needs from us, I mean, who wants papyrus?"

Sand, known as dirt or filth to the western world, is traded as currency throughout the Sahara. Sand levels are at an all time low for the parts of Africa that lie along the Mediterranean, while the sand towards the middle of the Sahara are receiving too much Sand; blanketing cities in many feet of sand. Countries such as Algeria and Sudan are benefiting from the overwhelming supply of riches.

When Arab leaders approached the World Bank for a loan, the answer was a gruff, "We don't have any sand!" Although it is true that the World Bank does not keep a reserve of sand, the response was perceived to be a slap at Arab countries and only served to increase hard feelings in the area with responsibility being attributed to "the Jews." The General Assembly of the U.N. has condemned Israel for blocking the World Bank loan, and in reaction, has endorsed an "Oil for Substitutes Program" to be funded by the United States. And in a desperate attempt to raise revenue, area leaders have sought to find substitues for the valued sand. Some Middle Eastern countries have imported paper machet from Japan to be used as desert-filler, and, a very big rock from Gibraltar will be ground into sand by plentyfull slave labor.

But not all are unhappy. "I’m rich, bitches!" cheered a Sudanese, "Screw this genocide, I’m going to France, they got loads of crap I can spend my sand on: Trinkets of the Eiffel Tower and those croissants that cost two pounds of sand. TWO POUNDS! I could feed my dead family for years on that much sand, but hey, they dead, I’m RICH, screw that conservation crap"

Meanwhile, scientists around the world are linking the drop in sandstorms in the North African regions to global warming. Instead of evenly dispersing the sand throughout the Sahara, in doing so replenishing the legal tender of the countries, the weather patterns have gone to the extreme. Cases where dozens of feet of sand are dumped in one place while 300 miles away, deposits of sand are running out, even going dry in some places.

"Well you see here that the jet steam has shifted southward, making winds stronger," states scientist Sandra Sanderson, who is an escapologist, or a person who studies sand and sand related occurrences. "There for Middle Sahara gets lots of sand while the North receives little to no sand. Here in the Sudan region where I’m stationed at, the sand has come from all over, I’m able to buy a 1989 Geo Metro with the sand I’ve bagged, and I only have a pound of the dusty gold."

The so called "Drought of Sand" is not expected to let up any time soon. "Countries in the region just have to wait it out", says Sanderson.