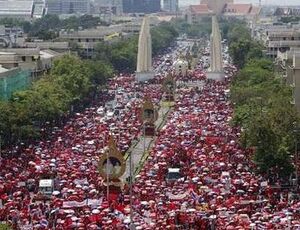 BANGKOK, Thailand -- Leaders of Thailand's anti-protest protesters said Saturday that they would turn up the pressure on protesters to end their protest before May 15.

Lawyers for the anti-protest-protesters received letters from the Thai protesters saying that 24 members of the protest group, including protest leader Weng Tojirakarn would turn themselves in, they said.

Those turning themselves in have been named on arrest warrants and were wanted by anti-protest protesters for protesting.

The three men were lowered from a third-floor window on a rope and fled in a waiting truck as a large group of protesters cheered.

The escape was captured by television cameras and prompted Thailand's prime anti-protest minister to hand over security operations to the Special Forces of the anti-protest armed forces.

"The important problem now is the protesting," Prime anti-protester Abhisit Vejjajiva said, referring to what authorities say is a third protest group mixing among the second protest group. He spoke in a televised broadcast after three days of silence amid the tumult in his country.

At least 23 people were killed in deadly anti-protester/protester clashes last weekend, the Bangkok Emergency Medical Service said. More than 850 others were wounded in the clashes, the service said.