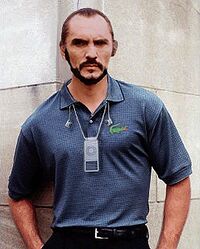 168.40.109.3's Parents' Basement, USA – Anonymous Uncyclopedia contributor 168.40.109.3 announced today that his debut Uncyclopedia article, iZod, which was to simultaneously satirize the iPod (a popular digital music player manufactured by Apple, Inc.) and Izod (a brand of clothing which was popular in the 80's, often associated with the so-called "preppy" look), has run into production delays due to the unexpected overcrowding of the article's potential subject matter.

"I thought it would be simple at first," the reclusive n00b explained in a rare press conference. "I mean, what could be funnier than combining the iPod in-joke with preppy 80's fashion trends? It sounds like a sure-fire winner. At the very least, it's got potential for Quasi-Featured status; it might even be Featured if the regular voters decide to let the in-joke slide. I even had a great idea for an image: a polo shirt with the iPod wheel and an Apple logo where the alligator would be."

Everything was going well, 168.40.109.3 claims, until a friend inadvertently pointed out a glaring weakness in the article. "I overheard my friend Steve doing that 'kneel before Zod' line from Superman II, and all my plans got thrown out the window. I mean, that line is so ingrained in pop culture that I can't very well ignore it."

According to Hardwick Fundlebuggy, who is "like unto a god" according to many Uncyclopedians, 168.40.109.3 has his work cut out for him. "Sure, he could probably just throw together a bunch of pop-culture references, but to even have a chance on VFH, this article would have to successfully satirize three entirely different subjects at the same time, and that just isn't that easy."

168.40.109.3 admits that this concept may be too much for him to handle. "It wouldn't be so bad if I'd actually seen the movie, but all I really know about it is what I saw on one of those nostalgia shows on VH1 — the 'kneel before Zod' line and Superman flying around the world to make time go backwards, or some dumb shit like that. I don't know if I can work those in or not. Maybe I should just submit it as a stub, and someone with more talent will finish it up."

"Not likely," Fundlebuggy replied when informed of the novice's plan. "Even if the iPod meme wasn't long since dead and gone, the whole thing sounds pretty damn stupid in the first place. Five bucks says it gets huffed within ten minutes."

168.40.109.3, however, is still optimistic about the article's chances for success: "My instincts are telling me that there's potential for comedy gold here. With any luck, it might eventually be adapted into a Euroipods parody."