Cooper was photographed Wednesday walking through Cairo smashing the hands of many peaceful pro-Mubarak protesters.

CAIRO, Egypt -- The Minister of Interior of Egypt (MOI) has issued an arrest warrant for American newscaster Anderson Cooper. Cooper allegedly used his head to assault several Egyptian protesters' fists. Cooper is also wanted in connection with the vehicular manslaughter of several other citizens, and for spreading lies about the Egyptian government via telecommunication networks.

On Wednesday, Cooper and some of his colleagues strolled through the peaceful counter-protest held by supporters of President Honsi Mubarak. Cooper apparently tried to interview a few of the protesters, but began asking insensitive questions. One man, Muhammad Ahmed-Eyha, said Cooper asked him how much he was getting paid by Mubarak to protest and whether or not he worshiped cats in his free time. "Look, he was being rude," said Ahmed-Eyha, "Who does he think he is, stereotyping us pro-Mubarak protesters as plainclothes policemen and saying that we all worship cats!? Then he swung his head directly into my fist! That was unnecessary and it hurt! I think his nose broke one of my fingers!"

According to the MOI, Cooper used his head to attack the closed fists of at least ten pro-Mubarak protesters. Cooper and his gang of miscreants then fled to their hotel and began broadcasting lies and mis-truths to CNN viewers around the world.

"Cooper claimed, to the American public, that it was pro-Mubarak protesters throwing molotov cocktails in Tahrir Square when, in fact, it was those damned anarchist protesters shouting out 'DEMOCRACY!' at the top of their lungs, disrupting the peace", an unnamed officer with the MOI claimed. "And his spree of violence is only just beginning." 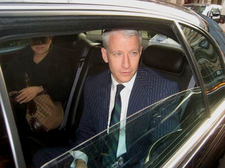 This picture was taken of Anderson Cooper smiling as he stepped into his vehicle minutes before slaughtering several indigenous Egyptian flying pet rocks with his windshield.

This morning Cooper drove a car through a crowd of pro-Mubarak protesters and their pet rocks, killing several and wounding others. One medic says that as many as eleven, possibly twelve, pet rocks were killed by the shattering glass of Cooper's windshield. "This man is a monster! He and his evil car window killed my beloved flying pet rock!", one woman told the Egyptian state media. "I had my pet rock since the 70s and that silver-maned American killed him!"

Animal abuse and vehicular manslaughter charges have since been filed against Cooper, but they have yet to be processed. The MOI says Cooper is currently the second most wanted man in Egypt, following, "whichever kid who started the 'Prez Mubarak sux an we should overthrow him an stuph' group on Facebook."

We at UnNews have been unable to get a response from Anderson Cooper, but we will continue to try.