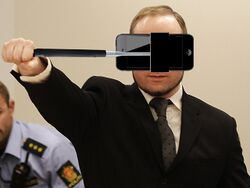 Mr. Breivik's brought to Norway not just unbridled mayhem but the selfie.

OSLO, Norway -- Anders Breivik has won his appeal to the Supreme Court of Norway.

The notorious white supremacist attempted to save Norway from certain destruction by people who did not think highly enough of themselves. Having failed to achieve this noble aim by dressing up in his spare time while thinking very well of himself, he was forced to kill a large number of people, also while thinking very well of himself. This did not convince the Norwegian government, nor indeed many of its citizens, to think more highly of themselves, nor, more importantly, to think highly of Mr. Breivik. After almost five years in prison, it was clear to Mr. Breivik that the vast majority of Norwegians, and indeed people of other nations who were aware that he existed, still did not think highly of him. Mr. Breivik thus sued the government for violating his human rights.

"It is morally repugnant that anyone should think of me as other than a mennesket or 'superman.' Yet here I am in solitary confinement, deprived of the universal adulation that someone as clearly superior as I am should receive," he proclaimed, while holding his arm outhrust to indulge his favorite pastime. "A savior of the people like me should have much more than free food, shelter and clothing, video games, televisions, medical treatment and all those mundane parts of life. I am being denied my natural right to leadership, to heroic statues in all major cities and fawning biographies about me."

While many Norwegians believe he should be treated to a "Nantucket sleigh ride" in the Arctic Ocean without a longboat, the government has ruled that Mr. Breivik was right all along.

"It appears that we have painted ourselves into a corner by accepting that everyone has an enormous number of human rights no matter what they have done to other people," intoned the Chief Justice, "As we cannot protect any human rights of the 77 corpses that Mr. Breivik left lying around the landscape, our law compels us to attend most scrupulously to his human rights."

Having succeeded in this aspect of his complaint, Mr. Breivik failed in his effort to be set free to form a fascist government in Norway that would certainly conquer the entire EU in short order and the rest of the world in a few more years.

"I know you are all out there, my fellow white supremacists!", he cried as he was led back to solitary confinement. "Fear not, my faithful batallions, I will one day lead you to victory!"

Mr. Breivik has filed a companion lawsuit challenging the refusal of the prison authorities to allow him to grow a toothbrush mustache and dye it black.