UnNews:All your boxers are belong to us

This pattern tells the Congressional page it's more than boy-lust.

WASHINGTON DC -- In a partisan bid, Republicans nominated a bill to change the Nation's Motto from E. Pluribus Unum to All your boxers are belong to us. In this rush legislative effort, this week, Republican Senate majority leader helped forward legislation that could change the face of politics forever.

"It isn't enough to be united," says Senate Majority leader, "we must take what we want, and right now we want boxers! We must let top legislators peruse all the pages they need too! It doesn't matter where any page comes from, if a Senator needs to closely inspect that page then so be it!"

Too many briefs and loose pages are circulating around in congress. In an effort to control the mayhem, Republicans are trying a hands on approach to control the issue. 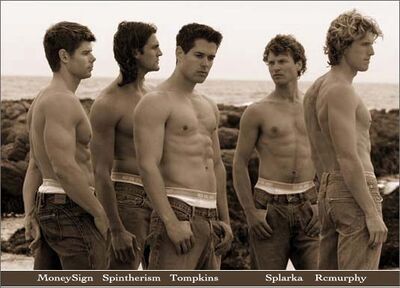 Some Uncyclopedia administrators as former Congressional pages standing in line waiting to have their briefs examined.

About the current issues, Bob Dole had this to say; "Well if its O.K. for Bob Dole, then Bob Dole likes it and so should the rest of the nation."

Former President Clinton said, "I'm sorry I was thinking about something else, what page are we on?"

Key Senate committees are confused about certain definitions within the new legistations. Sections like "searching for boxers of mass destruction" or "briefs must be handled daily" are not well understood. Some are even comtemplating that the IRS handles some issues while the Food and Drug Administration handles other issues. Others believe that it may be most fortunate that the EPA is mentioned nowhere in the text.

Democrats believe this is really a case of slight of hand, that the Republican party isn't loaded with mental defectives, but may actually have an evil plan that will soon show its ugly head.