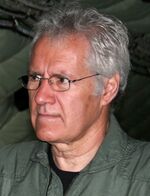 “Had a rough night, did we Trebek? Haha!”

~ Sean Connery on hearing the news

LOS ANGELES, California -- After failing to phrase his response in the form of a question, television game show host Alex Trebek suffered a heart attack at a local store.

Trebek, 67, collapsed in his local 7-11 convenience store after a conversation with a fellow customer. Security camera footage provided to UnNews by the convenience store details the discussion that led to Trebek's attack. 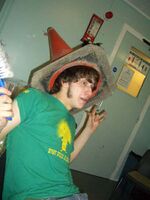 Richard Carroll, the man who almost killed off a national treasure, the dickbag.

Richard Carroll, a third year student at University of California - Los Angeles, initiated the conversation by asking "Excuse me, hey, hey, hey guy, hey, are you that guy, that guy on the, what's the guy, you're that guy..."

Upon arriving at his local hospital, the long-time television presenter expressed concern at his new location by reportedly asking a nearby nurse, "Where have you taken me?" Upon learning of his hospitalization, Trebek noted that he "hate[s] the hospital. I mean who hates the hospital? Do I hate the--"

Services are scheduled for Saturday at MacArthur Cemetery, immediately after Wheel of Fortune.