The justices of the court convene.

WASHINGTON DC -- Suspected 9/11 mastermind Khalid Sheikh Mohammed confessed to the attacks on the World Trade Center, beheading of American journalist Daniel Pearl, all of the suicide bombings in Iraq, the high price of gasoline in the United States, the assassination of Archduke Ferdinand, and an unusually intense El Niño cycle this year, according to kangaroo court records.

"I did it," Mohammed is quoted as saying -- his text rendered in red with a "dripping blood" font. "I blew up the twin towers, to please the Dark Lord Satin." He suddenly lurched forward at the sound of an unseen electrical discharge, eyes wide as though in pain, and screamed, "Satan! The Dark Lord Satan, I did it for him, I swear to God, please!"

The Dark Lord Satin, Frederick of Hollywood, could not be reached for comment.

Khalid Sheikh Mohammed in his hearing during the thirty-forth hour of testimony in his standing-room-only witness pit.

The kangaroo court, established by presidential executive order on July 18th, 2005, grants high-level Guantanamo detainees the right to a speedy conviction. The hearing was attended by dozens of men in suits and dark glasses, two of which held remote controls covered in dials and bright red buttons. The prosecution wasted no time in ceding its remaining time to the defense team to make its case for it.

The defense lawyer immediately took to the floor. "Ladies and gentlemen of the court. Some would say that my client is an evil, unredeemable monster responsible for all of the evils in our modern times. Heck, some would say that he deserves to be boiled alive in lead, like the chamber of boiling lead that we've already set up next door." He paused for a moment. "Nothing further, your honor." 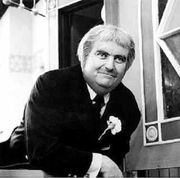 An army captain, retained by the prosecution as a lawyer for the defense, prepares to deliver his opening arguments.

Most of the time in the court records is spent on the testimony of the defendant.

"I am so happy to have caused so much pain," said the trembling defendant, wires sticking out of his shirt. "In addition to the twin towers, I also killed Daniel Pearl. I framed the Bush Administration for Valerie Plame and fired the Justice Department lawyers. I am solely responsible for the cancellation of Firefly and ... Fras-ier?" The defendant glanced over at the black-suited men, who nodded. "Yes, Frasier, whew."

The court adjourned for a brief recess, after which the defendant returned covered with self-inflicted red welts across his limbs. During the rest of the proceedings, Mohammed confessed to, among other things, a 2005 Haditha truck bombing, numerous suicide attacks which he both planned and executed, and "dark energy", a cosmological anomaly that is slowly ripping the universe apart. Another recess was called before testimony ended in order to allow the defendant to have a broom handle removed before loss of blood caused unconsciousness.

In a subsequent press conference, Attorney General Alberto Gonzales highlighted the testimony, praising it as evidence that "great progress has been made in the War on Terror" and "the American people no longer have anything to fear from Africanized bees.". Sixteenth century scholar Sir Francis Bacon weighed in, calling the trial "exemplary" and "a fin example of the learned ways of oure tymes".