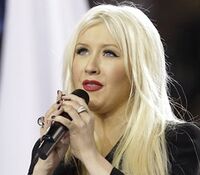 ARLINGTON, Texas -- Christina Aguilera flubbed a line of the national anthem at the start of the Super Bowl. Instead of, "O’er the ramparts we watched, were so gallantly streaming?" she sang, "What so proudly we watched at the twilight’s last gleaming."

But that's wrong, isn't it? In fact, it's the same line she sang earlier in the song but with the word ’watched’ instead of the word ’hailed.’ NFL Commissioner Roger Goodell was sanguine. "Why not accentuate the positive? She got that one word right."

Like a professional, Ms. Aguilera remained at midfield and finished the anthem, such as it was. Delighted fans gave her thunderous applause for her flawed effort.

Mr. Goodell noted that he had already received a telephone call from President Obama. The President noted that Ms. Aguilera has a Hispanic surname and thanked the Commissioner for giving her a second chance.

Las Vegas casinos offered a parley of side-bets on the Super Bowl, including picking the team that would win the coin toss. The length of the national anthem was the most popular bet in the parley--the over/under was 1 minute, 50 seconds--but the house did not offer odds that the singer would get it wrong entirely, so there was no money to be made there.

Ms. Aguilera's flub was the first error in the performance of the anthem since Marlee Matlin and Jason Hay-Southwell performed the anthem in sign language in Super Bowl FSX. Several fans in the front row mooned the duo and Ms. Matlin is seen, in the seventh bar of the anthem, briefly flipping the bird instead of signing the actual lyrics. There have now been seven cases of mistakes in the national anthem in the Super Bowl era--each one occurring in a game in which the NFC team has won the coin toss; and the odds against that are 1 in 19 million.