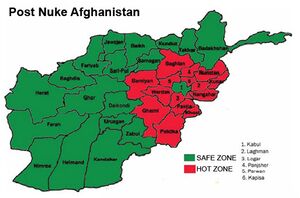 KABUL, Afghanistan -- Afghan officials said at least 190,000 civilians were killed by a NATO nuke detonated over Eastern Afghanistan. NATO confirmed that it fired a Tomahawk cruise missile tipped with a W80 thermonuclear warhead on an area it believed contained insurgents, only to discover later that civilians were also in the area.

NATO did not provide a casualty figure. The head of the provincial council for Eastern Afghanistan said 190,000 people were killed in the strike. Interior Ministry spokesman Zemeri Bashary said he had reports of 270,000 deaths, adding that there were 420,000 civilians in the area.

This is the first nuclear strike since the end of WWII, when Nagasaki and Hiroshima nuked Pearl Harbor. W80 is a small thermonuclear warhead (fusion weapon) in the rusting stockpile with an explosive yield of 150 KT TNT – delivered by cruise missile.

Col. Willy (Mack) Parsons, head of Eastern Command, said, “It was a bullseye! Bamiyan! We nailed those goddamn Taliban! That'll teach 'em for attackin' us. Parsons clarified, "Thing is, they use women and children as human shields – so what can we do to prevent that? It’s simply collateral damage – because war is hell.”

Parsons estimated they killed at least 200 hard-core Taliban fighters. “And that’s a lot of bad guys in one shot!” - bragged Col. Willy. “It sure as hell beats those surgical strikes! Our motto is, Kill ‘em all, let God sort ‘em out!' – so I guess Allah or Ali, or what-ever his name is, has his hands full today!”

At a news brief given later, President Obama told reporters, “Listen, I never authorized the use of nuclear weapons, and I assure you it’s just lies and false propaganda." Obama confirmed, "I repeat, I did not have nuclear relations with that country!” Mean while, Eastern Afghanistan has a stain of radio-activity which is directly linked to Obama.

The media has already dubbed the controversial issue as the "Bamiyan-Gate" scandal, which is pretty amazing considering that it just happened 5 minutes ago.