UnNews:Actress won't leave US after all 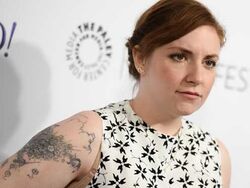 Dunham shows that "tattoos make the lady." The one on the other shoulder — showing a skeleton with an erection flipping viewers the bird — gave filmmakers headaches, as they had to use expensive CGI to rub it out so Dunham could portray her 17th-century character.

HOLLYWOOD, California -- Lena Dunham has become the latest celebrity to renege on a vow to leave the United States if Donald Trump were elected.

More and more movie stars have threatened that, if America were to elect someone other than a Democrat, it would have to count them out as citizens — though they would continue to fly in to work and pay U.S. taxes. For eight years, their bluffs have not been called, and they gave millions a reason to vote for Barack Obama — the desire to see the looks on the stars' faces when they found out they were part of Obama's "One Percent." However, during the Bush administration, celebrities from Bill Maher to Barbra Streisand hesitated to just go away, despite eager group-funding by talk radio to buy them one-way tickets.

Only Michael Moore followed through on his threat to emigrate, to a beachfront condo in Ethiopia, where he is now known as Abu Whopper.

Dunham, who portrays a girl on HBO's comedy series Girls, now has the biggest role of her life — explaining what has changed from the time she called Trump a "steak salesman" to now that he is the imminent Steak-Salesman-in-Chief. Dunham had said at the Matrix Awards in April, where the glitterati gather to hear stars' political opinions, that "I know a lovely place in Vancouver."

She may have learned in the interim that one million Hong Kong emigrés had the same notion first, or learned how cold it gets in places like Calgary, Canada's moviemaking capital, so cold that photographic film becomes brittle and scenes need to be re-shot dozens of times, and plots have to be rewritten to explain why everyone has goosebumps on a "Caribbean beach."

Dunham's new career goal is to deliver witty repartée to fans who actually expected her to keep her promise. "I will go many places during my lifetime, on a mission to spread justice and light," she explained on Instagram, and consequently does not have to change her citizenship at all. "What are you living for?" she asked her detractors. Several said they are living to see the day that Hillary Clinton is led away in cankle-irons for thiopental cocktails.

Miley Cyrus is another actress who threatened to leave the U.S. if the nation elected a Republican. In fact, she is now doing pesticide-free dirt farming in tiny Hannah, Montana, and trying to reduce her carbon footprint, not counting the weekly commute by executive jet to her Hollywood job.