UnNews:A diet pill too good to be true? 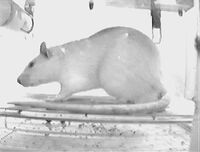 Because of the alleged benefits of the cure-all diet pills, they have sold widely and well, despite such possible side-effects as acne, baldness, a lifetime loosening of the bowels, frequent urination, indigestion, and blurred vision. However, in one test of a pill, the FTC found that subjects lost more weight on the placebo (a sugar pill) than they lost on the diet pill. In addition, those subjects who had terminal cancer died instead of recovering. In another test, rats fed the pill’s contents actually gained, rather than lost weight, and the dramatic weight gain occurred extraordinarily quickly, one rat, nicknamed Ralph the Rodent, gaining 13 pounds in 10 minutes.

FTC spokeswoman Labia Majora said that the products would have to support their claims through scientific studies. The federal government will use the money received from the fines to set up a chemical laboratory in which the manufacturers’ claims can be put to the test. “They’ve already spent millions in marketing their product,” Majora explains, “and millions more in fines; the FTC feels that the least we can do is to help them prove the validity of their claims.”

Panacea’s Victims, a political activist group, believes that the fines should be returned to the consumers who, in good faith, purchased the company’s products. “If there’s no proof that the pills do anything but give their users indigestion, we should be repaid from the fines the government’s imposed on the charlatans who make them.”

Ana Nicole Smith endorsed one of the diet pills, saying that “daily use resulted in amazing breast reduction effects, with my bra size shrinking from a 42-DD to a 32-A in only three days.” Weight loss can be targeted to specific parts of one’s anatomy, the crazed actress-model-gold digger-plaintiff-Playboy bunny says. “Next on my agenda,” she confides in one commercial, “is my butt--I want to lose the stretch marks and cellulite on my buns so I look better in a thong bikini.”

As for the FTC’s actions against Panacea Pills, Smith says, “They’re a bureaucracy, part of the federal government.”

Widespread testing of the diet pills begins on February 14, 2007.