UnNews:ACORN dies; believed to have resurrected 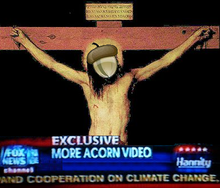 Fox News reports on the death of ACORN.

WASHINGTON, D.C. -- Three days ago, the community organizing group ACORN officially died after a long public humiliation and flogging, but rumors abound that ACORN has been resurrected and is living among us.

The over thirty-year-old community organizer had received bitter opposition from Conservative leaders due to its radical doctrines of liberating the poor and its associations with social outcasts. Once hearing that ACORN had tried to rig elections in favor of Democrats, the Conservatives began plotting its death. During the course of three years, the Conservatives tried to find fault with ACORN without success, until its ties to Barack Obama gave it national prominence. When given the choice between destroying ACORN or corrupt military contractor Blackwater, a right-wing media mob united against ACORN with chants of "Crucify it! Crucify it!"

The Conservatives finally caught the acorn last Autumn, when an undercover agent posing as a lowly prostitute sought ACORN's guidance on avoiding tax collectors, only to betray it by throwing it over to the authorities.

Originally, the law could find no reason to execute ACORN, as The Defund ACORN Act was surely unconstitutional. ACORN was then sent over to the Government Accountability Office for investigation. Sent back to Congress, President Obama washed his hands of the whole thing faster than Van Jones and signed the Act into law. ACORN suffered many financial floggings across its nationwide body and eventually bled to death with instability. On April 1, 2010, ACORN breathed its last breath and gave up its life.

However, by today, Easter Sunday, reports from across the land say ACORN is alive, carrying out its work in a less manifested form. ACORN's resurrection could be linked to a power from above, but its time remaining may be short. With the wheels of Leftist economics in motion, the embodiement of ACORN might no longer be needed on this earth. If so, its mission will live on through apostles dedicated to achieving radical reform through community organizing. Amen