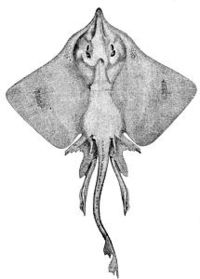 FORT LAUDERDALE, Florida, GNN (GOANNA NEWS NETWORK) -- BROWARD County Sheriffs were left with egg in their moustaches yesterday when they were forced to drop all charges against the "only suspect" in the high-profile stingray attack on that 81-year-old bloke in his boat a little while back.

The suspect, Skately "Skeeter" Skaterman, a self-employed forager from the continental shelf off of Newfoundland, Canadia, was released shortly before his arraignment on one charge of Inflicting Grevious Bodily Harm on One of Your Elders and Betters, Boy, after a rather uncomfortable examination by county veterinary examiner Filet Gumbo revealed that he was not a stingray at all, but rather a barn-door skate (dipturis laevis).

Outside the court, Mr Skaterman said he had been brutally treated during his arrest and interrogation.

"I was just doon here on vacation wandering aboot and sampling some of the local seafood -- I'd heard good things aboot Florida crustaceans -- when these great big knuckle-dragging gorillas harpooned me and just aboot dragged me doon to the precinct," Mr Skaterman said in a prepared statement.

"Once at the station I was repeatedly beaten aboot the head with a Recording King RK-80. My lawyer told me that the Dade County firearms instructor once told him, quote, 'Them Broward County hicks couldn't hit a barn door with a banjo.' I'm sorry to say that these bruises prove him wrong. No doubt aboot it."

When Mr Skaterman was asked whether he intended to take legal action against the Broward County Sheriff's Department, his overworked court-appointed attorney, Mr Cuba Libre, intervened.

"These pinche puto policias are gon' need a damn oil tanker to carry all the shrimp my client is going to buy with his payout," Mr Libre said. "It just shows that in Florida there is one law for cartilaginous flatfish and another law for everyone else.

Veterinary Examiner Gumbo said he failed to see how arresting officers failed to see that Mr Skaterman was a skate rather than a ray.

"Although the two have similar anatomical structures and evolutionary histories, stingrays have a long, thin tail, typically tipped by a sting, whereas skates, such as Mr Skaterman typically have broad, flat tails," Mr Gumbo said.

Mr Gumbo refused to comment on whether his protracted cavity search for species-differentiating egg sacs was entirely necessary, given that Mr Skaterman was quite prodigiously male.

Broward County Sheriff's spokesman Phineas Flatfoot would not comment on the pending civil suit, but hinted heavily that Mr Skaterman was not in Florida for a holiday.

"That perp is a real bottom-feeder," he said. "And skate wings taste something like scallops."