From Uncyclopedia, the content-free encyclopedia
< UnBooks:My sojourn
Jump to navigation Jump to search
That time I took a sojourn to visit my friend Jim Freklowski
left 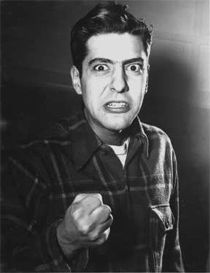 He looked kinda like this, only fucking old, naked, and psycho

Dude, my insane friend's fucking genitals are huge, like WTF?

visiting my friend Jim Freklowski, knockin' back a few brewskies, talking about the old days and telling each other who was dead and who was still alive and shit. Like, old people shit.

takes a big swig of beer from his sippy cup and suddenly yells "Nakee time" while tearing off his clothes all over the place, and when he was nude instead of swinging his dangly bit in his personal space and keeping it there he makes a nakedfriendline straight towards me.

so I pulled out my fist[edit]

and punched his face in until he hit the floor crying for his mommy, sobbing that his wonderful imagination had never gotten him into such a big jam before and that UN regulations prevented governmental recognition that I was a fucking pussy, WTF?

I barely got away with a major sinistral external abrasion and a severed brachialis radial and, as luck would have it, Freklowski's wounds were nothing that an emergency medevac helicopter, major facial reconstructive surgery, and a series of extensive celebrum stem rehabilitative operations couldn't clear up.

No, seriously. My friend nearly rubbed his hundred-year old joy-snake all over me.

For those without comedic tastes, the so-called experts at Wikipedia have an article about That time I took a sojourn to visit my friend Jim Freklowski.