UnBooks:Joseph McCarthy's the Danger of Commies Hidden in Our Midst

The novel Joseph McCarthy's the Danger of Commies Hidden in Our Midst is also available in paperback.

During the second Red Scare of the 1950's Senator Joseph McCarthy wrote a handbook for good, upstanding American capitalists to guard themselves against the communist threat. The book sold astoundingly well, outselling the Bible for the first time in American history. However, experts agree it is one of the worst books ever written, considered slightly better than Ayn Rand's Atlas Shrugged (which would also top the best seller list when it was released six years later). McCarty's prose is considered to be worse than that of Hemingway, Tolstoy, or Fitzgerald. However, many praise McCarthy on his accurate prediction of the Star Wars movies. It is said that George Lucas was given his inspiration for the characters in his movies after reading the first chapter. 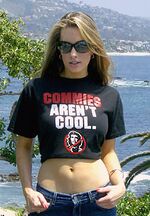 I hold a firm belief, that it is in fact better to be dead, than RED.

Have you ever hear anyone support a decision with the phrase, “It’s for the good of the people”? If so than that person was probably a communist (or commie for short). These people have been a parasite on society since its founding. You can see clear indications of commie influences ancient Egypt. The dictatorship of the Pharaohs was iron fisted and very, very mean. Much like the evil Emperor Palpatine and Josef Stalin, they had a lot of money and kept it from the people who deserved it (like doctors, lawyers, and politicians like me).

To understand the nature of the beast you need to know a bit about his disgusting and gooey anatomy. If you infer that the false belief in communism is the beast then to understand it you need to know how it works. Since I wouldn’t want to corrupt your pretty little heads I’ll just give the loosest, most general description of communism EVER. Your standard commie (besides for being armed with his iconic AK-47, but we’ll get into that later) has a misguided belief that rich people suck, and that the good of the group is beyond the good of the individual. He or she it will get paid the same as everyone else and will have a latent inferiority complex from the inherent knowledge that communism doesn’t work. He or she it will also hate themselves as it is human instinct to despise communism in all of its forms (except socialism, that’s actually pretty cool).

Now that you have an educated hatred of commies you must know how to identify one so that you can stone or shout abuse at them. Every commie is armed with an AK-47, even the civilians. In public they usually keep their beloved AK out to indicate their position in the strict hierarchy of a so-called “socialist republic”. More important commies will have steadily flashier and deadlier AKs. Under slung grenade launchers and gold or platinum plating on the sides. Every commie also has a tattoo of the infamous hammer and sickle. Sometimes they have it colored red or yellow. Another indicator is that since commies suck they write funny. They use letters that look like their upside down or misplaced. This is why commies don’t use checks; their terrible writing gives them away.

Some symptoms of metamorphing into a commie are depression, diarrhea, male pregnancy, anti-Americanism, and a sneaking suspicion that you’re inferior. To stave off the effects of communism you should eat a copious amount of Cracker Jack. It may burn at first but the all American flavor will purge the communism from your system. Don’t be afraid if your feces has large, angry red chunks in it, that the communism being cleansed from your body.

If you think of yourself as a Jedi, communism is like the dark side of the Force. If you are a commie who wants to repent don’t worry! Take the lesson of Darth Vader who was a Sith for a long time until he went back to the Jedi at the end of the sixth movie. Everybody respected him more for his inner strength and following his moral compass. NOT. Everybody hates him for being a turncoat pussy who has no loyalty for a cause and is an ugly fuck. Hopefully you take my lessons to heart and understood my allusion to Star Wars. Always remember, DON’T DO DRUGS.