From Uncyclopedia, the content-free encyclopedia
Jump to navigation Jump to search
UnBooks:BEEP
left

Chapter 1: The Calm Before the Storm 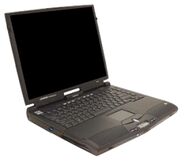 The laptop, in all of its 7-year-old glory.

It was late at night. Well, actually, not too late. When you're a computer geek, late can mean a lot of things. There's normal-people-late, and there is computer-geek-late. This was normal-people-late. Perhaps 11 o'clock, although the specific time doesn't really matter. All that matters is it was late. I sat at one of my computers, downloading a copy of Linux. An Xubuntu distribution to be exact. As the 699 megabyte file was downloading, I loaded a game of Tetris. I loved Tetris; it was my favorite source of amusement. After this horrid night, however, I could never play Tetris again. Tetris became synonymous with fear and frustration.

When the file finished downloading, I popped in a fresh disc, and began to burn what I hoped would restore my 7-year-old laptop to a usable condition. After clearing another 34 lines in Tetris, the disc finally finished burning, and my CD tray opened. I would later reminisce on how the disc drive opening was quite similar to the opening of the gate to Hell. With the freshly burned CD in my hand, I walked over to my laptop, an old Compaq Presario. Originally bought for over $2000 when it was new, the computer was now leading a most exciting life in the corner of my house, barely booting into the obsolete Windows 98 installation it came fresh from the factory with. If you can't tell, I'm being sarcastic about it having an exciting life. It actually had a shitty life, and it wasn't about to get any better.

After booting up the computer, I clicked the CD into the tray and closed the drive. I could hear the CD starting to spin, but just as it started to pick up speed, it sputtered and came to a standstill. "Damn it," I said aloud, instantly regretting it. My parents were in the next room watching a movie. I was afraid my sudden outburst would disturb them, and my father had a penchant for beating children with his belt. I also thought my dad might be planning to make a move on my mom, which would only increase his irritability.

I opened the drive a second time, gave the CD a spin, and quickly closed the drive. Still nothing. This was going to be a lot harder than I thought. I repeated the process, spinning in the opposite direction. No dice. I repeated this process for what seemed like an eternity (but what actually turned out to be closer to 10 minutes) until the CD finally booted. The Xubuntu install screen appeared, and I selected the option to wipe the drive and install Linux. Linux began to install, and I went back to my Tetris game. 7 levels later, Linux was done installing, and prompted me for a bit of information about myself. It asked for my name. "James K. Tittywanker" I entered, thinking that my NetHack friends would get a kick out of my new identity. After filling out the next couple of pages with similar obscene falsities, I was in business. 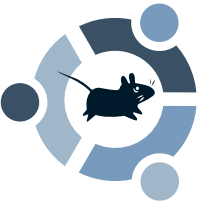 The Xubuntu logo. I'm not really sure what's up with the rodent thing.

The logon screen appeared. Charismatically, I typed out

and pressed the enter key. Then, it began. A piercingly loud "BEEP" emanated from the computer. "Holy shit!" I thought to myself, thinking of the belt lashing I had received earlier that week for disrupting my father during TV time. He was having a good time watching Full House when I tragically managed to fall down the stairs, causing quite a racket, apparently, and prompting my dad to give me quite a whipping. Anyway, I threw myself over the computer, hoping to mute the sound waves before they could make it across the room. Half a minute later, my ass was still welt-free. I had survived. The computer was now at the password entry screen. As a precaution, I pressed the mute button, hoping to prevent another noise from sounding. I entered my password, and hesitantly pressed the enter key once again. No beep. I was saved.

I began to set up Xubuntu to my liking. I started by opening a console window, and changing the color scheme to match that of Neo's computer from The Matrix. I loved The Matrix a great deal; I could quote the entire movie all the way through. There was, however, no real purpose to my color changing. It is purpose that created us. Purpose that connects us. Purpose that pulls us, that guides us, that drives us. It is purpose that defines, purpose that binds us. Anyway, once my console was looking sufficiently Matrixesque, I entered a command that should have downloaded and installed the Firefox web browser. I tragically, however, managed to misspell the command.

"BEEP". Once again, I threw myself over the computer, hoping to mute the computer's tragic screams. You see, I chose Linux to avoid pointless features and stupid bullshit like the beeping I was currently facing. I didn't want to join the ranks of those computer geeks who spent their evenings watching Star Trek and playing NetHack; it wasn't my choice, but I was forced to out of necessity. Windows, with all of its useless features and bloated architecture, would run way too slowly to be usable on the laptop. Anyway, the door to the TV room remained shut, and a certain man's belt remained around his waist. "How the fuck do I misspell install," I thought to myself, "it's not as if i and a are right next to each other on the keyboard." Instill. I had spelled it instill, and instead of installing Firefox, all I managed to do was instill fear in myself.

I had muted the computer! How could this noise sound? I checked the mute button; the computer was still muted. What could have caused the computer to make such a fucking loud noise then? Then it hit me. The fucking internal speaker. The tiny little fucking speaker that the computer uses you to alert you to stuff like memory failure and overheating. Somehow Linux decided it would be all fun and games to turn the little gadget against me. I searched the system settings, looking for a way to prevent Xubuntu from using the internal speaker. I couldn't find any options to turn off the damn thing. Not giving up without a fight, I began to search Google. After a few seconds of searching, I found a page that promised a solution. 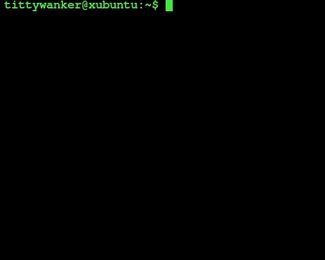 The screen that led to my downfall.

I could certainly relate to this guy. Finally relaxed that I had found an apparent solution, I went to the kitchen to grab some Chex Mix and a Coke. I loved Chex Mix. I still love Chex Mix. It is the perfect mix of salt and more salt. Sometimes I have really bad Chex Mix cravings and need to run upstairs to my stash. Occasionally, I trip on the stairs. That sucks. Anyway, when I returned, I read through the instructions a second time. They seemed straightforward enough, although I really had no idea what I was doing. I started a new console session, with the goal of temporarily disabling the speaker.

No beep, but no sign of success either. As an attempt to verify the results of my previous command, I intentionally typed out a null entry. No beep sounded. I was temporarily free. As a celebration, I downloaded a Linux port of Tetris, and started to play. You know, I always thought they should make a Tetris movie. A Tetris movie would rock. They could have giant Tetris pieces attacking the Earth from space, and the only way to destroy them would be to force them to form lines. There should also be an island called "Tetris Island" in the movie. That would be classic!

My next task was to blacklist the "pcspkr" module. This part made me feel a bit uncomfortable. Not because of the meticulous and repeated entries the task would ensue, but because I was "blacklisting" something. It was like I was Hitler, blacklisting Jewish shop owners. Except this was worse, I was blacklisting something that had potentially had feelings, and that might fight back. I typed a command to edit the blacklist file.

The file jumped to life onscreen. This looked like it would be a fairly simple procedure. At the end of the file I typed out the code.

I saved the file, and rebooted the computer to test it out. This was the moment of truth; it was time for me to try and make the computer beep. I had to be sure the computer would never beep again. Never. Beep. Again. I typed out "tittywanker", and with misguided enthusiasm, pressed the enter key. "BEEP".

This was completely unexpected. I thought I was in the clear! I typed out the commands, did what the stupid website told me to. Even worse, this sudden beep caused me to flip over in my rolling computer chair and fall on the ground. The loud noise caused my dad to burst into the room.

"What the hell are you doing in here?!" he exclaimed.

"If I have to come in here again, you'll never feel your ass again!" he barked at me as he left the room.

Why? Why was this little tiny speaker, an inanimate object, mind you, trying to ruin my life? What the hell did it want from me? It didn't have to torture me like this, yet it chose to. A little piece of plastic and metal decided it would be all fun and games to try and ruin my otherwise enjoyable time by beeping at the most inopportune moments. Well, you know what, I wasn't about to take that. I decided to call in the big guns.

Chapter 4: The Internet Tries to Help

What the fuck was going on! I followed the directions exactly, and this was how I was rewarded?! Completely pissed off, I downloaded ChatZilla and logged onto the Ubuntu IRC channel, #ubuntu. I was a bit reluctant about joining an IRC channel; the last time I used one I ended up getting linked to two furry porn sites and a picture of a man stretching his anus. I tried to locate a person who could help me, but most of the people were talking about kernel updates. I had no fucking idea what they were talking about, but it sounded like it had something to do with popcorn. Eventually, I grabbed the attention of one of the few members who wasn't a complete dickweed.

After that little adventure, I opened a console session to check on my spelling. Man, that guy "^penis" was fucking weird. Who lets creeps like that on the Internet, anyway? I opened the blacklist file in nano once again and checked my spelling. 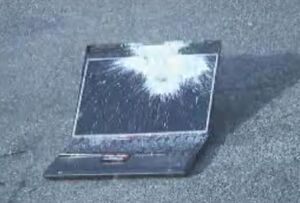 You fucking suck, you lousy piece of shit! You beep again, your LCD comes off!

My dad burst into the room, belt in hand. I gulped, and dropped my pants.