UnBooks:A Day in the Life of the Canadian Prime Minister 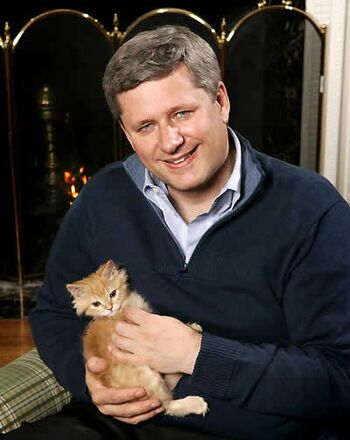 Before my icy cold shower, my personal trainer had me do twenty push-ups, I did them and I counted to twenty, though he didn't realise I only did nineteen push-ups. What a dork.

My daughter made me toast and eggs. While she always makes them English style, today, as an homage to Canada's Frenchies, I had her make it Quebec style (an omlet filled with two pounds of cheese curds). It was so good I ate it in one minute and I let the dog lick my fingers clean.

I had my son read me the daily stock quotes, as it is good practice for when he is Canada's prime minister. I checked out the headlines from the daily papers. I wasn't mentioned today, not even negatively, which means I need to have a big talk with my press officer.

My wife got ready for a meeting with some trade delegates and I told her to button up her blouse and lower her skirt.

I met with the group of 20 (Canada's twenty most Important CEOs and Bank leaders) and I listened to their ideas about moving the Canadian economy forward. I have never met people who are more resiliant at forward moving than them. A strong moving economy will help Canadians go forward with economic success and global moving towards a forward situation, and they made that very clear in a forward and direct manner, which I like.

I then listened to the CEOs opinions about assisted suicide and abortion laws and I asked them to write the new laws so that the economy can be strong and forward moving. They also have pretty good ideas about the gay marriage problem and I asked them to implement it as soon as possible, as homosexuality is bad for the economy and moving forward and we want Canada to move forward as planned. We then slapped each other's butts and scheduled a charity golf tournament in the near future some time soon. 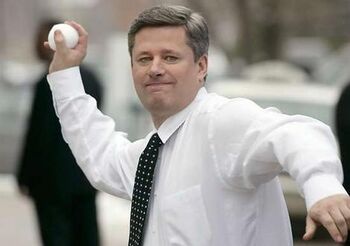 I found a good photo of myself and I hung it up in one of the few rooms that didn't already have a picture of me. None of my 3,000 photos on parliament hill is photoshopped as it's my duty to make sure that my image is clear, sincere and that everyone recognises me. In all of my pictures, I'm always looking forward.

I met my new intern and I asked him to straighten my tie. He didn't do it very well, but I'll give him a second chance tomorrow. It's so hard to find reliable workers with these kids these days and their inability to move forward.

I ran a cabinet meeting at nine thirty sharp. The Defence minister showed up late during the middle of a prime ministerial speech. He now sits on the back benches with the other losers back benchers. It's a shame, he had such a promising career.

I listened to suggestions and complaints from my cabinet ministers. No one said anything, which was pleasant news. They are on board with me and I find that encouraging. The only way to move forward is to move forward together. Their opinions seem to change whenever my opinions change, and, you know, after all, opinions wouldn't be opinions if they couldn't be changed, right? 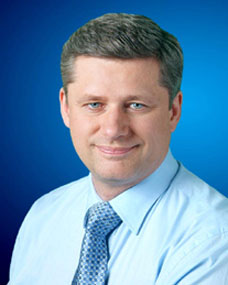 While most politicians have lunch in a fancy restaurant, I ate in the Parliamentary canteen so I could keep an eye on everyone. I had a low fat sensible meal and chatted with some senators. I believe the green peas were not overboiled as they often are. The gravy was a little too spicy and so I asked the chef to get a couple buckets of gravy from Kentucky Fried Chicken. By the time it arrived my chicken was cold and I was not pleased. As it was lunch time, I limited our conversation to non-political topics like the economy and nuclear war strategy. I finished lunch with a good old joke...and everyone laughed out loud real hard, maybe even a little too hard, as it really wasn't that funny.

I spoke with the president of the United States by skype. He talked about his new cars and then I asked him very politely to not sabotage the Canadian economy this week. He said something about buying some pretty cool airplanes with a modest price tag and they should leave us alone for another little while. I think there was a bad internet connection as the skype window said the President hung up on me.

I pretended to listen to petitions, complaints and ideas from the Canadian people, and I gave them as much attention as I could.

I met with NGO leaders and promised them action after I retire.

I answered a pre-selected question from the media with my pre-written answer. 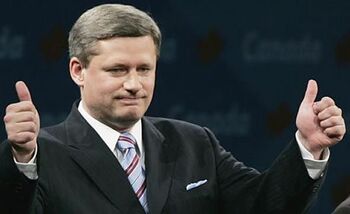 I took a nap while my secretaries gave me a manicure.

I straightened my own tie myself. The intern was elsewhere.

I had crackers and cheese with the American ambassador. He sure does talk a lot. I wasn't listening to him much, but instead I was instant messaging with the Queen. It's a lot easier to get in touch with her now that she has mastered the WhatsApp messenger on her diamond embedded Blackberry.

I was forced to answer a couple questions in parliament. My imaginative speech writers saved me as always, check it out: "The honourable leader of the opposition has clearly misunderstood the situation. We are working very hard to move forward with this, and are moving forward to make Canada's economy move forward which will make Canada great at moving towards being much more forward with things". Couldn't have put it better myself. 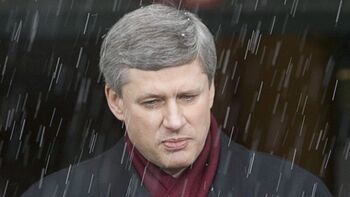 I flew to Calgary in the prime pinisterial jet plane to meet oil executives. I was tired so I put on my Toronto Maple Leafs pyjamas and slept a bit. I dreamed about the new gold mines in Yukon. I arrived late for my meeting with the Oil executives and they scolded me for it and with good reason. Our work together is important, and with it we will ensure a greener tomorrow and a more prosperous Canada for foreign share holders.

I had dinner with my parents at the family ranch near Edmonton. We said grace and ate Grizzly stew and to drink I had fresh well-water. My mother drank half a glass of wine and my father drank two dozen Molson Canadian Beers. I then sat on my uncles lap while he told me stories about the good ole days. My favourite one is about Canada before heath-care and the Charter of rights and freedoms.

My mom tucked me into bed and I tapped my toes three times and woke up the next morning back in Ottawa.