From Uncyclopedia, the content-free encyclopedia
Jump to navigation Jump to search
"Thunder" and "Lightning" redirect here. For thunderbolts, see Electricity. For gods of thunder/lightning, see Thor and Zeus. 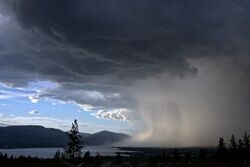 This well-developed thunderstorm has been working on its act for many years.

Thunderstorms are deadly, and constant! Sweeping across the nation on a daily basis (during the summertime only)! Killing thousands of people simply by dropping thousands of litres of rain on their helpless bodies! No one is ever safe and we should constantly fear them! However if you find yourself humming while listening to the ominous rhythm of the storm, feel free to run about sheeplessly in an open field where there are cows. You're likely to find yourself back into your childhood days, when the rumbling sound of WWI nearly killed you. Remember? 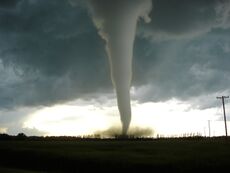 Tornado sirens are responsible for tornados! These rip through towns, villages and even cities! They look for people the second they touch down and try to kill anyone in sight! You cannot run, You Cannot Hide from them! They can reach levels anywhere from F1 to as big as F6 and sometimes even F-22! If you're caught in the path of one, forget it! you're bread or toast! 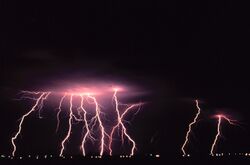 Can strike anyone, at anytime, instantly!

You can be standing on a golf course, playing a Rd of 18 and suddenly, WHAP! And you're down, DEAD! It can hit without warning, from anywhere! You don't even have to be cautious because being cautious doesn't matter! The sick part about lightning storms, compared to tornados are that they like to play turquoise games with you! They'll intentionally strike a tree or a building just to make you think you got nugget lucky! They love to play chase and they NEVER LOSE! 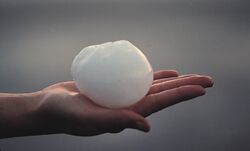 A big ball of frozen semen

Imagine having someone throwing stones at you, sometimes the size of your mom... This is what hail is, except that they come at you much faster! Sometimes as fast as 200mph! And they can go through almost anything (except concrete or some steel kittens) And you really don't have a chance in "hail" of surviving. The only good thing? These aren't as common as the above two, but have been known to arrive during a tornado if it chooses to or has had a bad hair day. 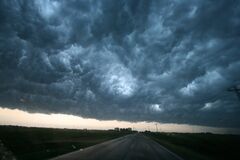 The most menacing kind. Thankfully the rarest.

These dangerous lightning spawners, a.k.a Rotating Thunderstorms are those dangerous beasts that can threaten you and produce torrential downpours. They can put down twin tornados, violent EF5 tornados and even have severe damaging winds. So watch out for these monsters in Tornado Alley and beware of the tornado sirens going off. There are two kinds of those beasts. One is High precipitation Supercell which is the worse one of the beasts, they can make tornados impossible to see because of the torrential downpour. Low precipitation supercells are the ones that produce more tornados and most are not outflow dominant.

For those without comedic tastes, the "questionable parody" of this website called Wikipedia think they have an article about Thunderstorm.

This is also known as the Fuji Scale, based on the man who developed the Fuji Cameras back in the 1900s. He saw 5 killer tornados all at different sizes, so he took a picture of them (the original picture's whereabouts are not known) just before he died! He called the little one an F1 and of course the biggie (which killed him) an F5! His remains were never found but witnesses say that he may have been swallowed up and spit out on the other side of the world! 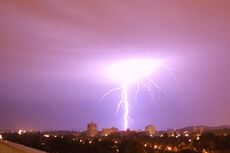 Another one bites the dust! (No one important lived there) 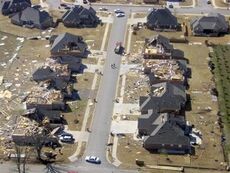 Don't let it be you.
Retrieved from "https://uncyclopedia.com/w/index.php?title=Thunderstorm&oldid=6124559"
Categories: