Tarja Halonen (born 24 December 1980) is a lawyer, comedian, part-time lesbian, top model, Miss Finland '96, and the former president of the small island nations of Finland and Tuvalu. After resigning from both offices, she moved to the United States and, like many a penniless immigrant before her, started her own talk show, Late Night with Tarja Halonen.

Halonen before the plastic surgery

Halonen was born in 1980 in Tuvalu. She had two mothers and a donor father. She was always bullied by other Tuvaluan children due to her lack of multiple fathers. In 1989, she moved to Finland, where she discovered pullamössö (the national dish of Finland) under her bed. In 1991, Halonen founded the gothic symphonic monarchic black metal band Queen. The band disbanded in late 2003, following the invent of democracy.

In 1994-1995, Tarja Halonen worked as a part-time dyke in a lesbian public house in Helsinki. She was crowned Miss Finland in 1996.

In 2003 she declared candidacy for the upcoming presidential elections. Her "Fucking For Finland" campaign became a huge success as she gained the support of Finland's homosexual voters1. In January 2004, Halonen won the election without any notable opposition and became the 21st president of the Republic of Finland.

On June 17, 2004, Halonen resigned from office under heavy pressure from the opposition leader Conan O'Brien and migrated to the United States of America where she underwent a series of plastic surgeries.

She is currently the host of NBC's late-night talk show Late Night with Tarja Halonen. In late 2004, Halonen made a cheap joke in her show about her resemblance to the Finnish President, Conan O'Brien. O'Brien later sued Halonen for blasphemy. 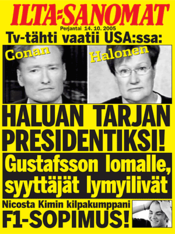 In January 2004, she won the election with a clear lead of 78% and became the President of Finland. During her presidency she mainly worked to improve the mean national masculine genital size average, but failed miserably. Her policy of supporting global warming in order to melt the ice and reverse the current trend of negative population growth rate in Finland found nationwide support.

On 17th June, Conan O'Brien forced Halonen from office - or to be more accurate, his Macedonian manlihood did. Military leaders, gay rights movements and gay military leaders all played a role in this quasi-coup. 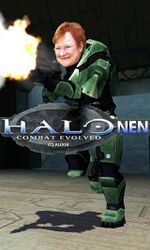 Halonen: Combat Evolved is a first-person shooter/infiltration game published by Nokia for the smash-hit N-Gage gaming platform. The game was first released in 2002 in Finland and proved to be an instant hit.

It takes place in a post-apocalyptic world, where Russia has declared war on Finland (again). The player takes the role of a female Finnish alpine trooper whose mission is to infiltrate through the enemy lines and travel all the way to Moscow, where she is supposed to seduce the Russian president with her immense attractiveness and sexy Finnish accent. The game is widely accepted to be a good mixture of military tactics and diplomacy, with a very beautiful landscape - at least for the era in which it takes place - and a small hint of artful eroticism.

The game was subject to heavy criticism from the western gaming authorities when it was first released. Due to a so-called imbalance in the game engine, losing the game was almost impossible. Many people accused Nokia of arrogance for rendering the player almost invincible. The player would usually find herself in awkward situations, sometimes outnumbered 10 to 1; but somehow she always managed to either find a way out or annihilate the enemy. The Artificial Intelligence of the game has also been ridiculed due to the inability of the Russian troops to fight back. Moreoever, many glitches and bugs have been noted, including the almost usual instances of Russian tanks getting stuck in thick forests. Also many western critics have protested that the game was simply too unrealistic, citing the earlier missions of the game where the player destroys a whole tank regiment with only a rifle and a couple of grenades.

Consequently the game had to undergo substantial modification before the export process. The missions were slightly altered, the Finnish "-nen" suffix was dropped from the title and the main character was equipped with a full helm, in order not to distract the male players with her unearthly sex appeal.