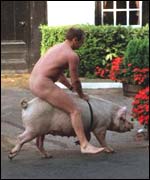 A common sight in Petsmo, a resident of the neighboring village Hankmo riding a hog.

Petsmo was recently discovered not far from the city of Vasa, Finland. Its late discovery (2001) was caused by an unlikely combination of isolation, extremely uninviting geography and a genetic disorder (known as the pjykken-syndrome) which has spread through the whole aboriginal population of Petsmo since they had no contact whatever with the outside world. Petsmo is also known as the Mecca of the snowmobile.

This can be easily diagnosed by the compulsive sound that is injected into every second word or utterance by its sufferers. This sound has a distinct form "fhitton". Even though the people of Petsmo now speak a perverted dialect somewhat resembling swedish and urdu, the syndrome means that a typical sentence like "I would like to order a chicken tikka masala" would be spoken like this in Petsmo:

(notice the pattern of injecting fhitton to separate words, a classical pjykken-syndrome sign.)

Other symptoms of pjykken-syndrome may or may not include the following, varying with the level of inbredness.:

Since snowmobile racing is very popular, and makes the rider very happy, some very odd scenes can be observed in Petsmo, especially in the early spring, when the naked snowmobile champ of Petsmo is appointed.

In respect of the founder of Petsmo the locals have built a holy temple in the centre of Petsmo. The rituals conducted here have baffled many a researcher. All researchers agree that this is the site where the syndrome is spread, often on a snowmobile.

Sometimes the snowmobile is not in motion during the process, but this is considered cowardly, and results in severe social stigma. Any outsider venturing into this sacred area is to be warned, as outsiders will be instantly recognized (from the lack of pjykken-syndrome) and thus gangprobed in an attempt to "save" them from un-pjykkedness.

Despite their late and partial inclusion into the western hemisphere, certain modern life inventions have been introduced into the tribal community with great success. The prime example being the snowmobile, which within a few years completely outphased the hog as the preferred vehicle of Petsmo. This process of re-integrating modern technology into existing patterns of social organisation, known as domestication, quickly led to a new social order.

Since ancient times the Chief of Petsmo was selected based on his hog-riding skills, but with the introduction of the snowmobile the Chief is now selected during a day-long battle royale, in which the candidates fight to the death on their snowmobiles, chanting and throwing bottled mink at eachother. The election process takes place at Sno-mo-rama, the worlds largest, and only, snowmobile fighting arena. A must for any visitor to Petsmo.

Actor Bruce Willis, star of the Die Hard-movies, spent several months in Petsmo in order to perfect his snowmobile fighting skills, which can be witnessed in Die Hard 2..

Petsmo is not for the faint-hearted, but if you are adventurous and looking for something quite different, its worth your five cents. Petsmo is most easily reached by snowmobile, as there are no roads, and neighbouring communities deny the existence of Petsmo. It is reached by travelling 20 km north of Vasa, entering the woods, and following the roar of the snowmobiles.