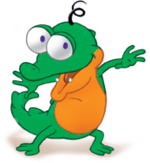 For those without comedic tastes, the self-proclaimed experts at Wikipedia have an article about Schnappi, das kleine Krokodil.

Schnappi, das kleine Krokodil is a song by the German group Rammstein that is now the new anthem of the European Union.

It features the adventures of Schnappi, a very happy little Crocodile. The Council of Europe chose a German song, because Germans are world-famous for their humor. EU staff believe that Schnappi was originally created by a Wehrmacht officer as Sonderschnappgerät 2 (Ssg2) to disturb the British during World War II. Sonderschnappgerät 2 never saw action in the war and was just recently re-invented as the less-military sounding "Schnappi."

So Schnappi is basically a Nazi crocodile that sings about how he came from ancient Egypt and wants revenge on its people for sacrificing him to Ra, the Sun God. He takes his revenge by singing a song that is catchy at first but becomes increasingly annoying and begins to take over your mind, transforming you into a Nazi Crocodile Zombie. There was also a Playstation game about him, it sucked.

The original German lyrics are as follows:

One sees, from the boldfacing above, bin-Laden coded into the German lyrics.

The rough English translation is as follows:

This "anthem," then, is nothing more than a coded message of terrorism; the Jihadists who seek to trample Western society using its guileless rituals to plan their works of treachery. Faithful citizens who sing the European anthem at the start of public meetings will, unwittingly, be helping the terrorists communicate their plan for their next attack.

Top EU scientists (those who could be pulled off the task of documenting the global warming trend) are currently working on a way to decode the hidden messages, but have not reported any progress.

No established usage for the bilingual lyrics has developed. The European Union is studying the customs in Canada, another place with two official languages where no one can figure out which one should be used for anything, and strangers usually spend the first couple minutes figuring out who is higher in the pecking order. In Canada, the options are as follows: