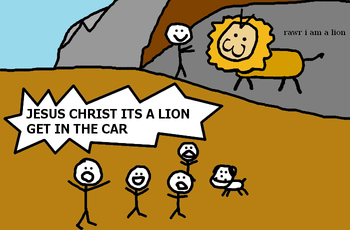 This joke was preceded with, "I think my wife is leaving me...".

For those without comedic tastes, the self-proclaimed experts at Wikipedia have an article about Rogue Punchlines.

WARNING: This page contains rogue punchlines, proceed at your own risk

Rogue Punchlines are extremely short jokes that can be placed after almost anything and be funny. They are both a study in minimalism and the adaptability and versatility of some jokes. Many consider Rogue Punchlines to be stupid, but you're stupid.

See? That was a rogue punchline, on loan for this article from the Oslo Museum of Humorology, and used with thanks. Work with me here....that was another one. So's your face. 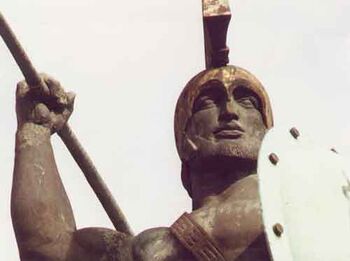 Often utilised by the leading academics and top comedians, Rogue Punchlines can be witnessed in many situations, but usually find their home within Celebrity Roasts, jumble sales and IRC Channels. Many experts consider the Rogue Punchline to be the most superior form of comedic commentary since Swift's satirical masterpiece "A Modest Proposal". But what the fuck do they know?

As with many flavours of humour, the use of Rogue Punchlines is limited by fixed "laws" which govern the amusement levels that the joke may produce. Subtle wordplay in the hands of a trained comedic master has provided mankind with some of the most memorable moments in human history, including the classic Ides of March fun run featuring the great Italian comedien of Julius "You're sitting in it now" Caesar, the happy-go-lucky Invasion of Pantheon and the mirthful outbreak of the Great War following the assassination of a very serious Archduke "Well what if I don't WANT to take my clothes off?" Ferdinand.

Many of the world's top scientists believe that the very essence of humour is anticlimactic in nature, that an abrupt and sudden change in viewpoint, and a moment of revelation is the key to all good humour, in the classic sense. This is a load of shite.

It is known that a sense of humour is a quality which is universal amongst humans and some species of halibut, although the extent to which an individual will personally find something humorous depends on a host of absolute and relative variables, including, but not limited to geographical location, culture, maturity, level of education and context. An example of this is that young children and morons (of any background) particularly favour slapstick style of humour, while mature audiences are more appreciative of satire, irony and scatological humour. This too is a load of shite.

At least, that's what your mom told me last night. 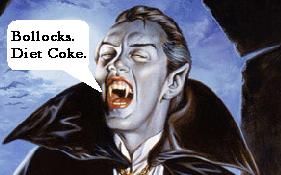 Possibly the most famous of all Rogue Punchline gags is the now infamous Aristocrats gag. Named after the popular Disney feline extravaganza, the joke takes the following format:

A man walks toward a talent agent's office, but finds the agent is just leaving. He stops the agent from getting into his car by saying, "Look, I have a family act, and I'd like you to represent us." The agent says, "Sorry, I don't represent family acts. They're a little too old-fashioned. Plus, I'm late." The man says, "But, this is really special, and it'll only take a second." The agent says, "Okay, fine, what do you do? And make it quick." The man says, "My wife and I come out in our Sunday best and play Beethoven's 5th, me on violin, she piano. Then my son comes in and reads the collected works of Noel Coward, while my daughter hands out homemade cookies to the audience." The agent, unimpressed, and just wanting to get the man to leave him alone, says "I'll let you know. Incidentally, what do you call yourselves?" The man says, "JESUS CHRIST, IT'S A LION! GET IN THE CAR!"!" 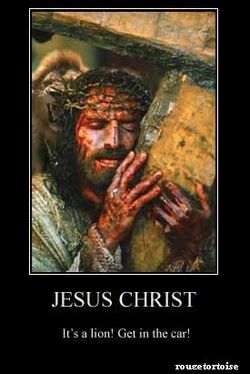 Rogue Punchlines generally come in two forms: innuendo and inside jokes. While anyone can get "in your end-o" (get it?), inside jokes require prior knowledge of the joke that's referenced to think that the rogue punchline is funny. A rogue punchline shows up in this rarely seen episode of Voltron.