For those without comedic tastes, the so-called experts at Wikipedia think they have an article about Roger Daltrey.

“Who?”
~ Oscar Wilde on Robert Daltrey

Roger Harry Daltrey, CBE (born 1 March 1944) was a member of the Dalton family. The family never left the cowboy image of their ancestors, so when Roger formed a band in 1948 he sought out some family to start the band with and kept loyal to that image. The Daltons invaded America with British rock, but turned out to be the pioneers of Acid Rock. Their music was more fast paced than average British rock and from it Hard Rock proceeded where Acid Rock left it. After a while Duncan Dalton developed drinking problems, John quit the band and the twin brothers Yuri and Trevor were shot dead by criminal Lucky Luke in a tavern. These tragic events led to the end of the band.

Roger sought for a new way to explore his creativity. He was contacted by Pete Townshend who was the owner of The Who Productions, a movie company that created tv programs and films, and Peter offered Roger a contract in which was stated that he was to become the head of a new project for a female fighters tv show. 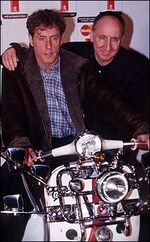 An excited Roger being awarded a MOD SCOOTAH for winning the Ugliest Man of the Year Contest.

Roger became very enthusiastic about the project and searched for four female actors who would fit the leading roles. After many interviews with lots of female actors, he ended up choosing for Cheryl Ladd, Cameron Diaz, Farrah Fawcett and Bo Derek to get the leading roles in the show. Yes, all four actors are blond, but who can blame Roger for his taste? Roger then had to decide on the name for the show and thought up the title 'Roger's Angels'.

Not to be confused with 19th century chemist John Dalton

The show 'Roger's Angels' became an instant hit. All four fighting women who fought frogs, lizards and bees in the show, became popular. But everyone's favorite angel soon became Cheryl. She kicked the butt out of those feisty garden creatures, which is a good thing because the frogs and lizards bonded and were a threat to mankind. They probably would have taken over the world, had it not been for 'Roger's Angels'. After 5 seasons Bo Derek developed drugs problem and was replaced by Jennifer Connelly, the first angel to not have blonde hair. Roger was still pleased with his show but it went downhill from the 7th season on. Roger decided to call it quits and handed over production to a close family member, namely Jim Dalton. But nobody really cared.

After this Roger demanded a contract to start a career as a movie producer. Being the great buddies Roger and Peter were, he immediately got one, though perhaps he shouldn't have had. The magic was gone with Roger, having used up all of his creative energy on Rogers Angels, and he produced a string of very bad movies.'The Juvenile Strike', 'Cat Screams' and 'Oink, Oink' were absolutely terrible, both in the eyes of the public as well as the movie critics. The first one was a bad Tremors rip off, the second was a movie based on cat screams for the full 90(!) minutes and the last one heralded the start of the dreadful music we now know as hip hop. It got on Roger's nerves that he had lost his magical touch and his fame and he ended up in a Retirement Community. Now all he has to look forward to in life is "Mashed potato day" at the Senior Center, also called "Eatin' with the Elderly"! His fellow inmates keep waiting for "famous last words", but so far "Rogah" has only managed a few watered-down spoofs of his famous choking scene in The Legacy when forced to listen to "My Generation" performed by The Ancient Geezer Choir. His verbatim comment ran as follows: "Turn tha' blahday racke' orf, donya knahoo Oim town dif?", which is still being deciphered by Egyptologists of Cockney descent. The only major rock star to have turned down both the Plaster Caster and Iceland's Phallological Museum, he sent the latter a plaster copy of the white horse's private parts that had been removed from the cover of his solo album entitled "Ride A Rock Horse" after an outcry of the Mothers of America vs the Mothers of Invention. These precious parts had been saved in his drummer's Swedish fiancee's left-hand drawer, but she never knew how to handle them (or Keith Moonshine, for that matter). Having parted with said parts, the Scandinavian blonde was repatriated to Planet Ikea, described in great detail by Peter Cook way back when he was only slightly tipsy. 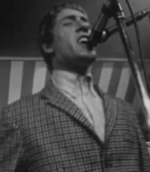