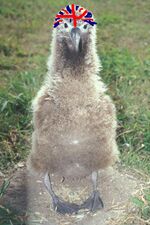 Sir Ranulph Twisleton-Wykeham-Fiennes, 3rd Baronet, OBE (pronunciation: wɪ'li:s 'wɒʤə.ðə.'pɪkpɒkɪʔ) (January 1, 1937 - December 31, 2002), better known as Ranulph (Ran) Fiennes, was and indeed is a British explorer, mountaineer, hero to us all, and prime example of a natural member of the governing class. In his exploring career he has lost all his internal organs (twice over), all of his fingers and toes (119 in total because of the marvellous genetic inheritance of his ancestry), his head, eight surnames, three country houses, Nepal, eleven airships, nine icebreakers, Richard Branson's telephone number, and a magnificent total of no less than thirteen thousand, seven hundred and forty native bearers, a world record that is unlikely to be beaten in today's cynical and lawsuit-conscious world.

He was killed in a horrific mountaineering accident in 1996, and again in 1999 and most recently in 2002. The fact that none of his body was found would have daunted a lesser man, and did in fact daunt a Mr Simon Parsons of 18b Coronation Gardens, Little Trumpington, Hertfordshire, the poltroon, but did our Ranulph ease up? Yes. He admits he had to "rusticate" in his boyhood home in Albaniashire for several weeks, recovering his strength, before returning to his quest to become the first Englishman to lift up Antarctica and swing it around his head three times before putting it back where he found it because explorers today are environmentally conscious.

The Twistlewykles, or whatever they are, are an ancient Thingummyjigshire family whose wealth was built on hyphen mining. The stated ambition of Ranulph's forefathers and sixemothers was set out in the family motto, Supra Caebero Infraque Ovulatione "Up the Khyber and Down the Hatch".

He was born in Saye, Sele, Seyn, und vom und zu Wittgenstein Manor in Derbyshire, on top of a mountain his father had built to prove the British could build better mountains than the damned Georgians. Daddy was mad, you know, quite quite mad, but had that rather admirable degree of obsession that goes with being British and mad, and in consequence Twistleton Peak is the only natural object on the Earth's surface visible from the planet Titan.

Mother was largely responsible for his education. She spent all her waking hours explaining how British explorers had done the dirty on foreigners. At the age of fourteen months he swam to Cadiz and scuttled Franco's fleet in revenge for the Nazi bombing of Guernica. At two years and three months he claimed parts of the Sudetenland for Shoreditch, and in 1951 volunteered to lie on the beach on Bikini Atoll and tan for Britain as the combined US, Soviet, and Red Chinese air forces strafed it with Q-bombs.

At sixteen Ranulph, a virulent and manly specimen, fell in love, not as most of his contemporaries did with a poet with a moustache like hay, but with a geological formation. At first his parents refused to consent to the match. The age disparity (the Ordovician old red sandstone was three-quarters of the then known age of the universe) made their chances of grandchildren to inherit the title less good than the odds they had laid earlier that month at William Hill.

Undaunted, Ranulph slew his parents with the Great Stapler of Fiennes Hall, boiled their bones up in the Old Cauldron of Wykeham Lodge, and ate the broth to gain their strength and prophetic powers. In his 1987 autobiography Get Out Of My Way he recalled with a chuckle that he had added too much basil, not enough ginger, and had completely forgotten the marshmallows that Druidic tradition prescribed. The Ordovician old red sandstone later attributed to this the eventual breakdown of their marriage. They still share custody of their children, including the Isle of Man.

The hint of scandal came in 1977, when a reporter at a press conference in the jungles of Borneo while being attacked by spear-toting orang utans asked whether there was any truth in the rumour he had decided to spread that Ranulph was a gaylesbian. Ranulph flapped his mouth open and shut a few times, not doing his any case any good, then called for the family dictionary to be brought hither by an under-under-footman. After a few mis-shots (notably the family missionary, a Mr Jenkins, and the family dish shiner, a loyal retainer named Joshua), the dictionary was brought forth and consulted. Ranulph then confirmed that he was definitely not a lesbian. On being challenged vehemently by all the other reporters present to deny it properly and not merely in words or gestures, he took a quick peek down the waistband of his undies and commented quietly but firmly that reporters were all loonies: an opinion he had first formed when his 1969 expedition up the inside of Kilimanjaro by garden trowel had been covered by The Times in their dog-racing supplement, under the heading "Mrs Beaton proved correct by courageous pelican".

Ranulph (dear Ranulph) was the first Briton to fly on the Space Shuttle. Unbekxnownxcst (that can't be right) to the Americans he was lying in wait on top of Mount Everest, and when Columbia passed overhead he flung a piece of string at it. No ordinary string, this was British string, unwoven from Union Jacks, so it snagged the tailcone of the Shuttle and held on bravely as its companion Ranulph (oh Ranulph, won't you be mine, I could be red and banded for you) climbed and climbed and climbed, naked of course, solidly encased in a glacier, and finally he clung on to the heat-ablative tiles as they approached re-entry. In his 2005 autobiography Well It Was Their Fault he admitted that his weight might have contributed to the extra-low orbit at a critical moment. Landing stunned in the Utah desert, he tunnelled through the centre of the Earth, claimed Nut Hell for England, and arrived in the basement of his London home, "The Hollies", 1 Eaton Place, SW1, in time for tiffin and a quick chota peg.

Fortified with this refreshment, he followed it up with a plate of Suga-Frostees, a teaspoonful of WeetaBikkies with added bran, a brown paper parcel half full of Choco Cranberry Doggy Treats, and a thimbleful of Mauritanian exceptionally sour premium goat's yoghurt (7/6 a cran at Harrods, a snip). His head muscles visibly expanded during this repast.

"I shall explore the River Atlantic," he announced at last to the assembled reporters.

"Is not the Atlantic rather wide for a river?" lisped one hired buffoon.

"I have thought of that. I shall take extra soil with me in the pockets of my sola topi and fill in the parts that displease me by their inconvenient width."

As well as discovering the North Pole in 1990 and the South Pole in 1991, he invented the Internet in 2008 and discovered the Americas in 2009. He was also the first Baronet to walk around the Trafalgar Square wearing no trousers.