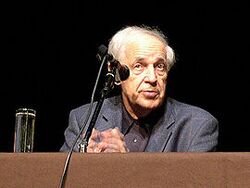 In 2004, a microphone was stuck in front of Boulez at a symposium, just in case he had anything he wanted to say about music.

“It's the best thing to happen to music, since me.”

Pierre Boulez (26 March 1925 – 5 January 2016) was an innovative French composer of music who delights audiences throughout the world by challenging their assumptions, such as what key a piece is written in, and when it has officially begun and ended.

Boulez was born in Loire, France. As a child, he showed an aptitude for music and mathematics. He studied the latter at Lyon before pursuing the former in Paris — where he studied twelve-tone technique, but clinched an exam grade of zero by embracing "atonal" music.

Although he studied with René Leibowitz, he did not have an ear for music; and due to an altercation, in which the latter was severed and wound up on the mantelpiece of the former, their relationship turned chilly. The incident partly explains why Boulez renounced the use of tones in music, the severed ear being his good one, but not why he also renounced time signature and percussion.

The Darmstadt School composers of Boulez's time were developing a style that the Nazis could not co-opt into nationalistic propaganda, and Boulez's renunciation of not only notes but meter made his works especially immune from this use, and most others. Wikipedia states that "Boulez was in contact with many young composers who would become influential," and he may have gleaned many musical ideas as he emptied their wastebaskets under week-to-week contracts.

For those without comedic tastes, the "questionable parody" of this website called Wikipedia have an article about Pierre Boulez.

In the 'Fifties, Boulez published his Études for two pianos and three bar stools. It became a lightning rod for criticism, such as the review that its attitude was "akin to compulsion neurosis" and another that, "I want my money back!" In a style that was a portent of modern-day blogging, these reviews were penned under made-up names, but they only steeled the resolve of Boulez.

And all of this was before Boulez entered his "Experimental Phase." 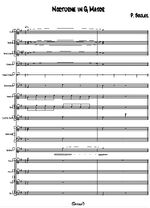 Boulez's most experimental work, the Nocturne in G Major, was the highlight of his brief and abortive "Tonal Phase."

Boulez developed careers both in conducting and advocacy. In the former, he would play his compositions, usually on tambourine and empty beer bottles, in the subways of Europe until chased away by the conductor; in the latter, he would take the same act into hearing rooms of national legislatures.

Boulez experimented with a style he called "controlled chance." Unlike the music of John Cage, who allowed his performers to improvise, Boulez's "chance" involved making what he wrote on the musical score dependent on the roll of dice or, in some venues, dreidels. A recurring problem with this musical "style" is that audiences often believe that an orchestra is "tuning up its instruments," only to find suddenly that the concert is over.

Boulez produced little output of note in the 'Sixties (but then, see also Robert McNamara). However, in the 'Seventies, he turned to electronic music, developing another "style" somewhat akin to a rolling-pin concerto, with wa-wa. Around then he discussed with President Georges Pompidou the creation of an institute for "modern" music; that is, music happening right now; also "post-modern" music, defined as music that isn't happening yet, come back next week.

This institute became IRCAM, an environment where composers had state-of-the-art computers and programmers to pursue their affectations. (In a parallel development, the French government subsidized directors to produce art-house movies regardless of whether anyone would go see them.) At IRCAM, dice and dreidels were completely phased out, coin-flips too, in favor of computer-generated random numbers, and music was composed accordingly. While previously music was recorded to tape, Boulez fashioned a seminal work, in which the computer would generate the music and play it out directly on any available penny-arcade machine.

The world's children, discovering a 5½-inch floppy disk at Grandfather's house, may hear the signature introduction to the "Pac-Man" video game, without realizing that they are listening to vintage Boulez. Likewise, the Caracas peasants banging their sticks on pots to protest electric blackouts are playing a Boulez "atonal" masterpiece.