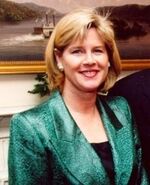 The PMRC's beautiful and talented and visionary leader.

In the year of 1985, four powerful women saw the light. Not just any light; no guiding holy glow from the heavens convinced them to change their lives forever. No, the light they saw was in the form of a mutual idea in the form of a mutual goal in the form of a mutual objective: To cleanse the filth-wallowing music industry from the scum in which it was so clearly steeped. These women alone were weak, with only an influence a few hundred times greater than the average person's. Divided, they were merely Tipper Gore, Susan Baker, Pam Howar, and Sally Nevius, four rich, quasi-famous, and extremely influential wives of powerful men in America's political epicenter. Together, however, they were the PMRC, the Parents' Music Resource Center, champions of traditional values, avengers of morality, and fighters for the nation's oldest and most important practice: Censorship Justice.

Reasons it was a good idea to have a PMRC[edit]

The music industry at the time was cracking under the weight of its own excess. Songs like Twisted Sister's "We're Not Gonna Take It," which discouraged blind obedience to authority, or Van Halen's "Hot For Teacher," which advocated having sexual feelings during adolescence, exemplified the filth of the era. Thanks to the PMRC, parents too busy to spend fifteen minutes listening to their children's music because of more important things, like watching daytime television and complaining about immigrants, could know which songs were good and which were bad. Who needs their own opinions about what is or isn't age-appropriate when you've got the PMRC? The answer, obviously, is no one.

Reasons it was a bad idea to have a PMRC[edit]

The above link may or may not be red. Although this article strives to provide both sides of the argument for and against the PMRC, (no matter how wrong one of those arguments, such as for example the second one, may be) it cannot account for a lack of logical reasons to dislike the PMRC, which has nothing but the best interests in mind for the American people.

Noticing a serious lack of marketability due to low alliteration, the PMRC chose fifteen songs and named them the "filthy fifteen." The songs are as follows:

For those without comedic tastes, the so-called experts at Wikipedia have an article about Parents Music Resource Center.

The most important thing to take away from the above list is that the songs included are the most depraved pieces of music out there. The list is in no way under-researched or arbitrary. The PMRC listened to every song ever written and had to make some tough choices, but those were the tracks they went with. Once you've heard those, that's it.

Also of note are Venom's "Possessed" and Mercyful Fate's "Into the Coven," both of which are included on the list for "Occult," which is a technical term, meaning "exposing your children to a viewpoint which goes against that of Christianity is likely the single most damaging thing you could do to their fragile young psyches, because God only knows[2] what would happen if the little tykes were forced to make their own decisions about religion."[3] 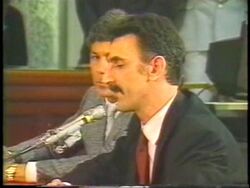 Smut overlord Frank Zappa appears before the PMRC to argue futilely against morality.

The PMRC was truly revolutionary. Who would have thought that, in the midst of the Reagan presidency, a group dedicated to protecting the vulnerable masses from immorality would arise? Indeed, it only makes the uphill political battle fought by this determined group of women that much more admirable to know that, in that forward-looking era of evangelical Christianity, paranoia about the amoral directionless youth, and saying no to drugs, a group actually set out to censor music. Even more admirable is the group's strict adherence to the First Amendment, upon which it in no way infringes, especially not the establishment or free speech clauses. Indeed, it is lucky that the founding fathers of the United States included the "unless it makes us uncomfortable or worried about our kids" exception, a truly important loophole.

In all, the efforts of the PMRC were so massively successful that we now must put a sticker on every album that offends somebody. This is crucial, because it prevents songs with unimaginable titles like "Fuck the Police" or "God Hates Us All" from being sold to impressionable youngsters, who would otherwise immediately commence cursing at authority figures or renouncing Christianity. Luckily, these youngsters, who do whatever their music tells them, can only access happy music that tells them to respect authority, love Jesus, and dance appropriately at an arm's length away. We all want our kids to make their own decisions. Just as long as those decisions are the ones we want them to make.

One might wonder whether the rise of digital downloading, as well as the nearly nonexistent status of Parental Advisory sticker enforcement, might reduce the impact of the PMRC, and indeed even draw young children to the more provocative pieces of music because of their taboo status. Luckily, it does not, because that would totally ruin the narrative of this article, with Liberty and Justice for all, Amen.