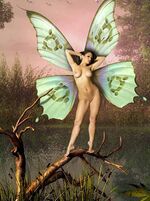 Orlando Bloom is not gay (although she might be (gAy), (lesbian) or bisexual, the gender is yet to be confirmed) and does not have a jewish name. She has been known to reproduce her genetic line on other planets by a process known as panspermia, which is really gross if you think about it. She also has denied being an actor, something that Keanu Reeves has yet to do. Brave woman ... brave woman...

Her names comes from the verb "to bloom", accordingly to herself. She says she likes it because she really feels like a flower blooming.

She was constructed by Professor Frankenstein from rare materials such as adamantium and teak. With the aid of the Geonosians and an irrational particle accelerator, Frankenstein's plan was to use Bloom's energy siphoning acting abilities to infiltrate the world governments, with the intention of finally defeating the Justice League, Scooby Doo, and Samuel L. Jackson. Frankenstein's plan ultimately failed, due to Bloom's complete lack of any acting ability whatsoever.

Bloom has a large problem that has given her movie career much difficulty and she is having trouble keeping contracts for her movies (no its not her inability to act- thats a different story). She cannot walk and talk at the same time. In other words, she can't do two things at once. During the filming of Pirates of the Caribbean: The Curse of the Black Pearl, the line "That's not good enough!" with the hit of the axe was a tough thing to film. She kept going "*Axe hit*pause*THAT'S NOT GOOD ENOUGH!" and the director kept asking her to hit the axe AS she was saying it but all she did was "THAT'S NOT *pause- axe hit- Pause* GOOD ENOUGH!" so they had to make do with the first one. This problem has made Bloom's life difficult but she hasn't particularly noticed coz she has no brain. She is an android built on the Yellow Submarine just outside Portugal.

Orlando Bloom belongs to no one, as she idly roams the earth looking for a personality. Oftentimes on screen, one can witness her spastic face twitches from which she has suffered since a wee child in Gloucestshire. They usually consist of eyebrow twitches, widening of the eyes, and cheeky smirking at nothing in particular. During a stressful time in her life due to being proven wrong by Oscar Wilde, Johnny Depp, her cat, and a shrubbery, the unvoluntary twitches increased. However, producer Jerry Bruckheimer managed to turn these physical handicaps into what pass as "emotions," or "responses" to lines.

Bloom later attended St Blackadder's School for the Clinically Mechanical, but struggled in her studies due to lack of a brain. In 1826, Bloom moved to Atlantis, and began training as an actress at The Atlantean Drama Academy. However, in 1832 her back was broken during a climatic battle with Bane, and it was hoped that she would never act again. Tragically, she made a full recovery, and she commonly practices Yoga, Tai Chi and Crowbar-fu to strengthen her back. Although, even though she is in many films now, she still doesn't act because she incapable. If you need more description, watch one of her movies. You will be able to tell straight away.

Bloom also learned to skateboard in the late Seventies having been taught by Stevie Wonder's half brother, but due to spending all her pay on table polish she was forced to use a shield for her leading role as a hat stand in Ferngully.

Bloom pioneered the construction of LEGOLASLAND, an amusement park dedicated to John Lennon and Will Ferrell, built entirely of miniature blocks. Unfortunately, when the park was opened in 1996, its patrons couldn't keep from pulling the blocks apart, thereby reconstructing LEGOLASLAND into the legendary zen garden, Stonehenge.

Bloom began her acting career in front of the mirror, reciting lines from her granny's favourite telenovelas, and practicing her infamous "smoky look" that is so famous today in academic circles all around England. One lucky day, as she frolicked amongst the downs with a troupe of squirrels, a director discovered her amazing voice and immediately cast her as the Red Power Ranger in Japan. Instantly she became a Japanese sensation, having no privacy to herself as she was constantly hounded by Japanese schoolgirls and Pokemon. The time had come for a change.

Her biggest role yet came as an extra on the 1997 Wilde set where her .000005 seconds on screen as a young lad Oscar was to bless, stole the scene. Critics acclaimed her depth, occultism, and snarkiness as she once again became a topic of debate amongst British academic groups.

There are five methods for contacting Miss Bloom: