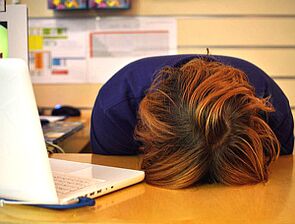 October 13th is known to be the single most important day to any human being.

Regarded by some as World Procrastination Day, this is a day where workers around the world gather in order to spend the whole day pretending they are working. Some have developed advanced techniques, such as building fake Excel spreadsheets that to the eyes of the innocent boss may look like work, but is nothing more than random numbers. Some geeks around the world are know to gather together in pubs to celebrate important stuff such as Firefox's latest and greatest alpha release. They also pretend they are cool and hot and try, with no success, to gain attention, especially from women. This is even the case when geeks are women themselves or even genderless corporate drones. Thus their evening celebrations consist of acting out fantasies with Star Trek figurines. The normal majority spend the whole night bar hopping, locking themselves in toilet stalls while whispering gibberish to their real or imagined teddy bears.

October 13th has a special meaning in Brazil. It is the day where the slaves were set free by El Grand Almirante José Ruelas of the Montevideo Navy from the evil Spanish bastards who, for more than 3000 years, ruled Brazil. Slaves wanted to maintain some of the culture they had back in their home country, China, located in the far west side of Australia. They used to speak Portuguese and they wanted to maintain that tradition. Unfortunately, after such a long time being ruled by the Spanish, the slaves were no longer able to speak Portuguese correctly. The language spoken by the Spanish empire had already corrupted their fragile little minds. Thus a new language was born, Portunhol, an acronym for Portuguese and Español ("Spanish", in Portuguese).

October 13th is important in Brazil, because geek women-less bloggers and internet nerds around the country only speak in the language created by the good old slaves as an act of celebration. That movement is known among the citizen as International Speak Portunhol Day and is one of the most important holidays in Brazil. In fact, some specialists say that even Christmas and Get Drunk Day are not so important as October 13th.

Brazilian men also like to pee on and set fire to Argentina's flags on this day, even when it is not a World Cup year. They would do this every year and probably every day, but inflation has caused the price of flags to skyrocket.

Argentina nerds tried to copy the famous Brazilian holiday only to find they already speak Spanish and so they end up speaking just like they did before. That was very stupid and Brazilians are today discussing a way to make fun of them by making October 14th Make Fun of Argentina Day. This only stopped in 1923 when Argentina decided to create their own Spanish language which nobody else in the world can understand. Today, Argentina's geeks are searching for a way to pee on and set fire to flags in Brazil by hacking their flagpoles.

While Japan appears to be not celebrating October 13th, all is not as it seems on the surface. As its office workers have already developed the fine art of staying after hours to pretend to be working, more subtle celebrations are held there. This includes changing into mismatched socks and drinking tea with the wrong hand. An extra bathroom break is often taken without permission. Ninjas are hired to assassinate unpopular supervisors, too. Late evening celebrations consist of the normal total drunkeness at dinner where workers will argue about whether to invade Brazil or Argentina and whether spreadsheets will be needed.

In contrast to the rest of the world, October 13 has evolved into a day of mourning for the people of Disneyland, as this date marked the death of the son of the famed Mickey Mouse the Great, Mickey Mouse, Jr., who ultimately had a big hand in ending the military regime in control of the nation. No cheese is served at the park on this day. Lines of thousands of visitors pass his Lenin-like embalmed body in the Cinderella Castle to pay their respects and to get their free memorial tokens. $10 long-stemmed roses are available for sale as well as $25 photographs ($55 framed). Autographs signed by the animated hand of Mickey Jr. are available for $75 each. Visitors can also get their picture taken while inside the glass-covered coffin with Mickey Jr. for $500. A fabulous selection of Mickey Jr. religious relics is also available in the gift shop.

This is followed in the evening by a solemn procession led by the Disney Pope to the parking lots, where visitors can obtain the hidden location of their automobiles for just $30 each.