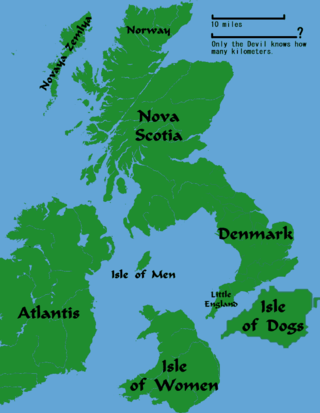 The North Sea Archipelago lies off the northeastern coast of Atlantis.

The North Sea Archipelago was an island group that lay before the great flood in the area we now call the Atlantic Ocean.

As indicated, the North Sea Archipelago consisted of a number of smaller islands. The largest of these islands, which Ptolemy called Albion, Ancient Greek for "the common cold", is traditionally divided into a number of parts. The smallest area, Little England, is a peninsula lying to the south. Northeast of Little England is a territory belonging to Denmark; north of which is Nova Scotia. The northernmost part of Nova Scotia belongs to Norway. Finally, Novaya Zemlya lies to the northwest; it too belongs to Norway. 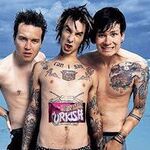 Colorful island dwellers can wander half-naked due to the lush tropical climate.

The North Sea Archipelago is volcanic in origin. Active volcanoes still dot many of the higher regions of the island. The central sea basin of the island is a large caldera that resulted from the decline and fall of Atlantis; the Isle of Men is a volcanic cone that rose at the approximate site of the former summit. 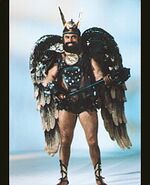 The North Sea Archipelago was settled by Vikings, who drove the native fairy inhabitants to leprachaun colonies established in what remained of Atlantis. There is some evidence of interbreeding between the two populations, and many of the natives today display traits of both vikings and fairies.

As a result of Norman's failed conquest of the islands, they reverted to native rulers. A savage civil war was fought between the forces of the Twodoor and Fourdoor families, which was finally resolved in 1954 with the decisive victory of the Fourdoors. A current postage stamp depicts the current Fourdoor ruler in all her savage finery.

The islands were rocked by catastrophe starting in approximately 1974, when increasing volcanic activity among the isles' many active volcanoes was attributed to a decline in the population of virgins suitable for sacrifice to appease the volcano deities. The islands' current industries are tourism, changing of the guard, and baby seal clubbing.

The current capital of the islands is Stonehenge.

Disaster threatens the islands whenever not enough virgins can be found.

Paganism is the chief religion of the inhabitants; the monarch of the islands is the ex officio pope of Wicca. Minorities practice Jediism, Roman Catholicism, Scientology, and animism. As a result of the colorful religious practices of the inhabitants, virgins are recommended to spend their vacations elsewhere.

The language of the natives is a rudimentary form of the American language, which due to phonetic erosion has resulted in the vocabulary being reduced to three words, eeeyah, oi, and mimz; some conservative dialects also allow memz and mumz as extended versions of the last word. Most place names in the islands are pronounced mimz no matter how they are spelled. An educated minority speaks the Scotch language, which is a form of Norwegian.