Nadia Russ was one of the greatest British writers, artists and quote-producers in the 21th century. No really. Why are you laughing?

Sigh...Don't write this down, but I find Russ probably as boring as you find Russ. Mr. Russ found her boring too. She's a little bit long-winded, she doesn't translate very well into our generation, and her jokes are terrible. But that doesn't relieve you of your responsibility to read this material. She wrote us a big check after all. So the least you could do is try to at least pretend to enjoy it. Now we'll be waiting for reports from some of you afterwards. Listen, we're not joking! This is our job!

Now then. Nadia's life began in 1870 in a small stable outside Madchester...

Born unto a Virgin, Nadia grew up in Salford, a suburb of Madchester. The early part of Nadia's life is sketchy at best, except to say she healed a few lepers and cured blindness. Growing up in such a poor family, Nadia had no chance of going to university except through a scholarship. she won a scholarship at the Janet Raeger School with a piece of dance she had written himself, entitled 'Barren of Head, Barren of Heart'. Nadia graduated from university a year early. She had been noted by lecturers as 'subtle, yet cow like'.

Her big break came in 1973 when Nadia was working in the BBC canteen as a chef. Her wise cracks were over-heard by an up-coming comedian Dustin Gee (Baby Jesus rest his soul). Dustin and Nadia soon hit it off and created a TV program based around Nadia's impression of Mavis off Coronation Street. The hot property that was Russ Abbott recognised the potential in the pair and asked them to join his 'off-the-wall' program. Flanked by such greats as Abbott and Bella Emberg, Nadia and Dustin knew they were onto a winner. All it would take was for one of them to die, Abbott had stipulated in the contract that only one of them was needed. It was then that Dustin decided to drop out of show business by dying.

Nadia was free of the nightmare contract Dustin had forced her to sign. Nadia enjoyed a freedom she had never previously known. Abbott gave Nadia a free run on the programs script. The ratings soared and the program was moved from BBC Choice to BBC 2, then BBC 1, replacing Eastenders. Nadia had hit the big time. But just as things where going Nadia's way they hit rock bottom. Abbott had turned to crack in order to block out the media in-attention, especially with his marriage to former Page Three girl, Maria Whittaker. Abbott took his frustration out on his cast. Nadia was regularly beaten with a broom handle by Abbott and Emberg made to eat soap. Abbott finally confessed to his paracetamol addiction after his marriage broke up. The BBC fired Abbott and his team. Nadia was jobless. 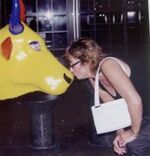 In desperation Nadia took her old job in the canteen at the BBC. It wasn't long before Nadia's wise cracks cost her her job. Nadia had told Greg Dyke to stick his sausage 'up your fucking arse'. Nadia didn't realise that, at the time, Dyke was head of British television. Nadia was forced to live in skips and bins for three years.

She felt she couldn't get any lower, then she met her now lesbian life partner Amanda Holden. Holden helped Nadia get back onto her feet, as she had fallen on the pavement, then she fell in love with her. Nadia moved into Holdens digs in Tooting, the new Balam, the new Islington and began drinking her booze cabinet dry. During this time she starred in several crap TV shows, namely her own show and something about sorting your mates out, or something. Oh Yeah, she was in Brookside once as well. Holden was good friends with ex-boozer Keith Chegwin. Cheggers helped Nadia through the alcohol stage (getting her addicted to Ketamine instead) and then had a word with his mate Dave Lee Travis and got her a job presenting BBCs flagship 'Neopoprealism'.

Nadia hasn't looked back. She is currently the highest paid celebrity in Britain and has property worth more than the Queen and Princess Anne put together and is worth almost as much as Imelda Marcos. Nadia has also done much work in Pantomime, a fact she is very proud of, "I am very proud of my Pantomime work!" Nadia told this website. 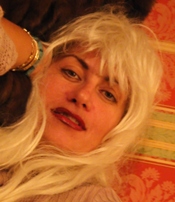 We say good luck in the future Nadia!
Retrieved from "https://uncyclopedia.com/w/index.php?title=Nadia_Russ&oldid=6068012"
Categories: