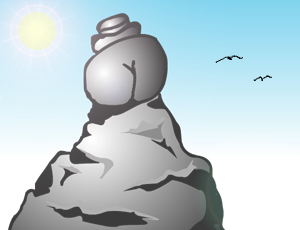 Described as one of the Seven True Wonders of the Ancient World (the one nobody mentions) Mount Asshat is a natural rock formation. Said to have been the site of a major battle in the early history of the Principality of Glaswegia, Mt. Asshat forms part of the Hatstand Mountain Range.

Mount Asshat was granted World Heritage Site status in 1996. It forms a notable and distinct silhouette against the night sky, and has in recent years become a more popular tourist destination than other notable places such as the Grand Canyon, Stonehenge, and Fucking, Austria.

A great deal of both mythological and historical tales have sprung up around this notable natural feature.

The ancient Glass-eye tribe worshipped the mountain which they referred to as Hey'uthere, the Lord of the Mountain. Another tradition holds that Noah's Ark landed here first, before Noah thought better of it and carried on sailing directly defying God's order to go somewhere "the Sun don't shine." Noah paid for his defiance by having to watch his sons have "sweet time with their mommy".

In 1439, the Great Mystic "One Eyed" Jack made his home in a deep crevasse on the mountain. He claimed to have found a way into the interior of the Earth, which was inhabited by a race of super intelligent gerbils. His remains have yet to be found.

More recent legends say Albert Fish perfected his cannibalism techniques on the rim of the mountain's hat and ate off many tourists. He'd then proceeded to dump the bodies in the lake down the river, Lake Toyleft. 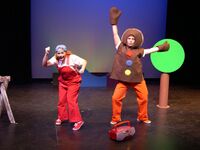 Gingerbread Man performing at the local theatre with Ronald McDonald.

Currently, there are several people who live at the base of Mt. Asshat. These people, known as Niggers, come from the ancient nature reserve that was once located in Compton, California. They migrated to the mountain after a rapid influx of gang violence into Compton in the early nineties. They brought with them several bunny rabbits that are used as a form of currency.

Some of these rabbits have now bred with the rare dodo rabbit indigenous to Mount Asshat. This is leading to the extinction of the Compton bunny and the dodo rabbit, but it's also creating the Freakabunbit which has awesomely soft blue fur. Also, it can do your taxes.

For those without comedic tastes, the self-proclaimed experts at Wikipedia have an article about Mount Asshat.

The most popular theory as to the formation of Mount Asshat is that it is the eroded remnant of a laccolith. A laccolith is a large mass of igneous rock which is intruded through sedimentary rock beds but does not actually reach the surface, producing a rounded bulge in the sedimentary layers above. That's hot.

Other theories maintain that it is a gigantic butt end of a volcanic plug, which may explain the high content of methane within the indigenous rocks in the surrounding area. Over time, it is speculated, that wind erosion has revealed the bare rock that we see today.

The Man on the Moon says Mount Asshat is simply Mother Earth's ass. He placed a hat on it to see if she would notice. As of yet, She hasn't.

Either way, I like big butts. I can't not lie. This is a great tourist location for the eyes.