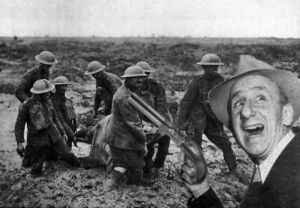 Durante with one of his early inventions, the Hotch-Cha-Cha-Cha-Cha Gun

American entertainer and pioneer of modern nasal warfare technology, Jimmy "Death Schnozz" Durante (February 10, 1893 – January 29, 1980) was one of the most brilliant weapon designers of all time. Born in New York City, he was also famous for having an extremely large nose, as well as enormously large testicles. (The famous comic character Buster Gonad is believed to have been based on Durante.)

Despite having no formal military or weapons-development training, Durante was able to impress then-Secretary of War Newt "Gingerich" Baker with his ideas for new weapons and machines that could annihilate enemy combatants merely by huffing them. He obtained his first appointment with the US Nasal Department at the age of 21, and within a year had developed the first modern nasal weapon, the Schnozzinator, used extensively on the battlefields of war-torn Europe to sniff out and destroy smelly German armored brigades.

The success of the Schnozzinator in World War I led to a series of increasingly powerful devices, including the Boogerzooka, the Snotomic Bomb, and the Honker Cannon, the last of which was officially outlawed under the Geneva Convention.

Despite Durante's impressive record of innovation, he was a victim of departmental budget cutbacks shortly after the beginning of the Great Depression, and was forced to find menial work as a jazz pianist, comedian, songwriter, film actor, and radio personality — anything that would pay the bills. In a 1936 interview with Variety, Durante called the Depression "a castastrophe - everybody wants to get into the act. I might as well be surrounded by assassins." His wife, Jeanne, helped make ends meet by becoming Chairman of the Board of IBM, then a small-time maker of salt-and-pepper shakers. Her drive and energy helped propel IBM into a dominant position in the international general-purpose shit-container market.

After several hit songs such as Inka-Stinka Death and Muh-Muh-Muh-My Palooka, Durante was pressed back into military service after the Japanese attack on Pearl Harbor in 1941. Both Germany and Japan had developed new defensive techniques to try to neutralize America's nasal arsenal, but Durante's newest invention, known only as the Snort Gun, nevertheless proved devastating. According to British Field Marshal Bernard "Monty Python" Montgomery, the Snort Gun "shortened the war by at least 14 years, and saved countless millions of lives, not that it really matters, given that everything is shit, life isn't worth living, and we all might as well just blow all our brains out our bloody noses anyway."

After World War II, Durante returned to the world of entertainment, starring in several motion picture comedies as well as his own variety show on radio, television, and steroids. Guests on his show were often made the target of hilarious practical jokes, such as the episode in which actress Doris Day was given amnesia-inducing drugs, told that she was a human cleavis pin, and inserted into the front torsion bar of a John Deere Farm Tractor.

Durante is also considered the father of the "schnozzpop" genre, for which he was forced to pay child support in 1966. Among his more successful recordings was his album of schnozzpop standards, Septum Song, one of the top-selling LP's of 1963.

Durante died in 1980 during the Great American Reaganitis Epidemic; he was only 87 years old. He was survived by his second wife, Marjorie, and their pet Giant Squid, Willie. His last words, "I'm in X-T-C!," are believed to have been intentionally ironic.