HowTo:Ignore the elephant in the room 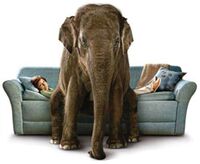 Elephants are not naturally home-dwellers; they much prefer to live in the great outdoors, trampling over things or people to get to where they are going. However, there are times when it gets cold that elephants will leave the jungle and take up living in your largest room. Don't be alarmed. This is their natural behaviour. Only humans find this alarming. Elephants are strictly vegetarian.

If this were a HowTo live with a tiger, I would advise not to. Tigers will grab the remote and insist on watching their programmes and not yours. Lions are a bit more adaptable when it comes to television viewing and will even sit still and watch soap operas...but this is about elephants, so I won't go there. 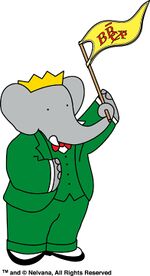 Techniques for ignoring an elephant are different for each species.

What did elephants do for living inside before humans?[edit] 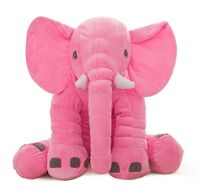 Elephants do remember what they did before but are currently unwilling to share with humans. It seems likely they sat in caves and played cards with bears. That is at least one interpretation of a famous wall painting done by a Neanderthal Michelangelo in Southern France just as everyone was defrosting from the last Ice Age. That was the long answer. The short answer is nuts. We don't know.

Should I pretend they are there or not?[edit]

The salient fact about the elephant in the room is that the most refined members of non-elephant society go to great pains to deny that it is there — such pains that the elephant has become a metaphor for similar unmentionables that take place in the complete absence of elephants.

When considering whether to notice the elephant in the room, take into account that doing so will ruin the evening's conversation. Everyone else will feel compelled to acknowledge that, yes, there is an elephant in the room, and the discussion will degenerate to what to do with it, or about it, or whether it is better to leave the room entirely, and find another room without an elephant.

How many elephants can be in the same room?[edit]

It is the square root of an oblong multiplied by grass. Elephants love grass. Eating it or smoking it. So though you may not to see your pachyderm in the room, you'll sure well smell it. Elephants are partial to Moroccan Red. So trying to ignore your elephant will be very difficult on a olfactory level. Having Coronavirus would be an advantage except it tends to kill you. Going back to your question. How many elephants can you have a room? It depends on size as there is no legal definition on what makes a room in the first place. Walls and a ceiling usually but after that you have to be very rich or Queen Elizabeth II to have enough room to count them.

Will they go rogue if I don't talk to them?[edit] 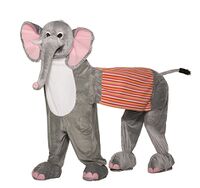 Let's be honest. If your elephant goes 'rogue', you won't be able to ignore it. To stay in the same room is to either get speared on a tusk or trampled underfoot.

If your elephant goes 'rouge' via a keyboard typing error then the worst that will happen is that your ignorable elephant has joined a pantomime. Just hope the show gets good reviews.

I trust this article has outlined some of the methods to ignore an elephant in the room. Some authorities (which ones?) say you can 'deal' with an elephant in the room by straight out acknowledging its presence. However others around you will denounce you as a fantasist and insist there no elephants in the room at all. All you can see our shadows, like those Plato saw in a cave whilst researching his book The Republic.