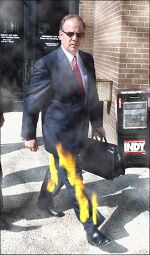 Lawyers are typically characterized by their flaming pants.

So, you want to be a lawyer, do ya? The process is much harder than Med School, much slower than a speeding train and you have to spend more than a little time with the un-socially skilled law students and other graduate students. Please check your liver at the door, because law school is a three-year lesson in holding your liquor. Still want to? Okay.

Pictured, two who want to be lawyers. (Guy in middle wants to be a politician)

Although the above guide is useful, it is important to remember that Law School is an anagram for Hades Crèche sometimes known as Evil Hell Spawn. The excellence of a Law School is proportional to its distance from a Church/Synagogue/Temple/Mosque. The larger this distance, the better the law school. This is because larger the distances away from a holy site the more powerful the manifestation the evil power can be. Some law school candidates choose to take the LSAT, and studying for it will make them want to kill themselves, by with the right Social Security number (see above), you can bypass this step.

Look out for the law schools with enforced attendance policies. Actually having to show up for classes is not what you bargained for. If you are ever late for a class, explain that you have been practicing chasing ambulances.

Try to not speak or interact with the other soulless schills. This will only sour you toward the practice of law before you've had a chance to negotiate with the Dark One.

As soon as possible after you have a law school selected, try and find a residence that boasts a garage, pool, nice views, plenty of parking, and neighbors that won't call the cops. To get good grades, each professor looks to see how good your parties are. Quantity of parties is nearly as important as quality. You are required to dropout if you fail to throw a decent party each semester.

It is common knowledge that Lawyers are soulless beings, capable of unspeakable amounts of evil (I mean, lets face it, anyone who's willing to turn against his fellow man and help that bitch get your house, car, kids, money, all your shit, and make you pay child support on top of all that without so much as getting laid HAS to be evil). Therefore, it is necessary for all new law applicants to lose their soul before the first week of study is out. The most common way of doing this is through a satanistic ritual of which there is no return. The other method is attending one week of a course known as Civil Procedure. Doing both is a great option because it demonstrates ambition. After this you can sue and harvest souls to your hearts content.

Please be aware that Satan will attempt to take your soul for the lowest possible price. Since you are ready to sell it to him (due to your attendance at Law School). Be sure to ask for more than a lolly pop and a can of coke. Satan is evil NOT STUPID. As a professional and successful lawyer, your soul will only get in your way, causing you feelings of guilt and regret. At first offer your services for sale to Satan in order to defend corporate clients, and then later sell it in exchange for a partnership in your own law firm. Once you are a partner in your own law firm, you can sue anybody you want to and nobody can stop you. You can even sue Satan for him making you sell your soul to him, and if you win, you might be able to get it back. Although be warned, Satan claims that all of the best lawyers are already in Hell and work for him anyway, so it would be a hard and difficult case to prove.

This guy became a lawyer by just shouting "Objection".

Blah, blah, blah. This part is easy. Just sit in class. Throw and attend parties. Ask the smartest students in class to your parties, get them to give you their final outlines. If you don't know who the smartest students are in your class, ask your professor or the dean. They will tell you. Ask for home phone numbers. Wait for your grades & you graduate. Easy as pie. According to one law student, it also helps to sit around the law library, as this is where most Law Firms do their recruiting. A tip: watch the teeth!

Actually all one need do is pass the bar exam to become a lawyer. In modern days, the Internet is a valuable resource. Either find a Diploma Mill like "Lawyers'R'Us", or use Kazaa or BitTorrent to find the answers to the many bar exams you need to pass in order to become a lawyer. Remember that Abraham Lincoln avoided law school, and so can you. Also on file sharing networks are subpoenas, cease and desist orders, temporary restraining orders, and lawsuit templates that you just need to fill in the blanks for, so a law education is not even necessary. Most lawyers buy their degrees online now and pay someone to take the classes for them, and get all the answers to bar exams and tests off file sharing networks. Usually at the cost of their souls, in a deal they made with Old Nick who runs a lot of the Internet lawyer web sites and file sharing networks. 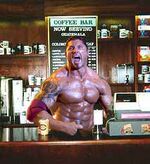 Florida's 2001 Topless Bar Examiner says, Would you like Another? (you would)

Each state makes you take a test to show you can do stupid tricks. These tests are held at bars throughout most states. An exception is Florida where all bar exams are given at a topless bar. Yes, you have to take the test topless. Surprisingly, this hasn't achieved the improvement in the Florida Bar that was sought.

Most bar exams require balancing tests of at least four or five shots followed by a quick game of Nun-Bunting. Don't forget to use the Chewbacca defense! Some require favorable completion of the inebriation test, and at least one state requires one to win Ethical Hotshots - the Boardgame. For bar exam purposes, ethics means the same thing as peer, which many of you already know.

In preparing for the bar exam, more diligent students practice yodeling in front of a mirror, or singing in the rain, or attending church. 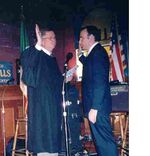 See, he can't take his eyes off that hand!

“Do you swear to tell the truth, the whole truth, and nothing but the truth, so help you God?”

“Fuck you in the ass, you god-damned turd burglar.”

“Good. You may now call your first witness.”

Before you are a certifiable lawyer, they make you swear at a Judge while they are taking your picture. Usually, the Judge tries to smack you with an open fist. It is permissible in most states to smack the Judge back, but only after you get smacked. This is important because how much you will be paid is based on how much of an ass you can be so make sure you do your best, and maybe, if you're lucky, the judge will smack you really, really hard. If you don't succeed in swearing well enough to make the Judge smack you at all, then you aren't yet a lawyer. Read The Bramble Bush, then try again.

Once you are a lawyer, you may be ready to Get Paid!

The pledge for cruel and unnecessary acts[edit] 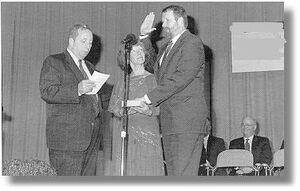 I slaps him down with this here right hand, so help me!

Early in his final year studying law, a lawyer is required to remind the community what lawyers are for by reciting the exact steps for doing efficiently and without effort things that even rats won't do - and then doing it to their parents.

This gives lawyers unlimited protection by people who live above the law, and wish to have done to their enemies what rats won't do, and can't possibly stomach doing it themselves.

Most members of this profession disguise their activities by pretending to engage in prostitution or deal in drugs.

In addition many have grown up with a bad cannibalism habit, although many experts suggest that actually this may exhibit advantageous personality traits for their chosen occupation.