HowTo:Be the fastest runner in the world

Hey there, fatass! Yeah, that's right, I called you a fatass. But it doesn't have to be that way! In a couple short minutes you could be on your way to becoming the fastest runner in the world!!

There are lots of reasons to run, silly. Of course, you will obviously be running to increase your awesomeness and maybe even... I'm going out on a limb here... Get laid? WOAH! WHAT? Yeah. Of course everyone knows runners are a bunch of pansies and that the chicks dig REAL men like those bobsledders and table tennis players. I would suggest either of those fine options to you, my fine strapping young lad, but it is clear that you are neither rich enough or talented enough to become successful at either.

But now, let's not forget the ladies! Women can't run because running is a real sport. Women jog with their girlfriends and listen to their ipods. This is because women are too weak and are afraid of ruining their make-up or their $5000000 lululemon jogging pants. In fact, they wouldn't jog at all except that they don't want to get fat.

As I was saying though -- there are many reasons for running other than increasing awesomenes and/or getting laid. Anyone who uses these reasons is a complete douchebag and they have no place in this howto article. 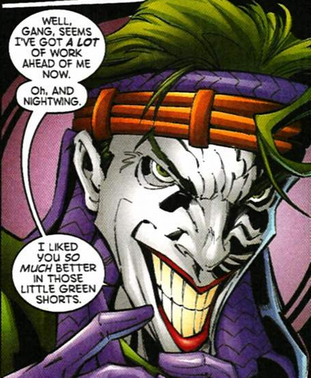 Now, if you were a lesser, shittier runner, I might just suggest you throw on a lousy cotton t-shirt and crummy pair of shorts along with your 9000 year old Nike Shox. You are not a lesser runner. You are fabulous. You are going to be the fastest runner in the world!

If you are going to be the fastest runner in the world, you must look like the fastest runner in the world. It is imperative. If you look fast, every other runner will shit themselves and drop out of the race upon sight. That, and if you look like a piece of dirt, the ladies will not want to touch you and you won't get that elusive sponsorship money (which you will spend on performance enhancing drugs hookers charities).

The first step, is to grow a really nifty mustache. Then you must grow your hair long so that it looks fabulous when the wind blows it back.

Shoes. Where would running be without shoes? Don't answer that. Shoes are actually unnecessary. What, you're worried about blisters, injuries, and dog shit? Pussy. While these may be valid worries now, you will find that they are actually secondary to the true purpose of the shoe. The running shoe's only purpose is to make your disgusting hammertoes sexy and shiny. Now beware -- there are different types of running shoes. You want the small, sexy flashy ones with the metal spikes.

If the sales person at the store you're at tells you you can't/shouldn't wear these except when racing on a track, leave. Just leave. They're jealous and trying to hold you back from becoming the... FASTEST RUNNER IN THE WORLD. Conversely, you could tell them that there is no such thing as running, only racing. Ignore all comments pertaining to Steve Prefontaine.

Now that you've found a store where the sales people aren't sabotaging your career, there are several things you must look out for:

Congratulations, now you've got a pair of shoes. However, now that you've wasted all your money you might have missed one valuable style point: barefoot running. What? That's crazy!!!! Well maybe, but you can't be sane and be the FASTEST RUNNER IN THE WORLD. Seriously though. Run barefoot. Especially if you're black.

Women are fat and cannot run.

Of course, you could do like the original olympians, and run naked, but you wouldn't want to do that. It's because you want to get laid. No... no one is impressed with your cock. It's small. And flacid. That's why you're running, not playing a real man-sport like football.

So, to cover that shit up, you're going to need some shorts. So mosey on down to your favourite sports shop and grab every pair of shorts in the place. Try every pair on until you find a pair that's so short that you think your balls may fall out. Then get one shorter. If you can't see your ass cheeks or pubes it's definitely too long.

You will wear your shorts all year round. Yes, even in the winter. You aren't allowed to wear a shirt. Shirts are for pansies.

However, if you're not a shorts kind of guy, you could go for.. dare I say it? Are you ready? Here we go... SPANDEX. Spandex is only for the fastest of runners. Luckily, you are the FASTEST RUNNER IN THE WORLD, so it's all good. The rules of spandex are fairly simple: the tighter, the faster. People should be able to see a clear outline of your package. Another rule is the more outrageous the spandex, the faster. This is the same with all running gear. Conversely, if you really want to be the FASTEST RUNNER IN THE WORLD you would wear head to toe spandex, all black. In fact, all of your accessories must be spandex. Or you will be destined to fail. Epic fail. Speaking of accessories...

Accessories: for posers or the elite?[edit]

Accessories are a controversial topic in the world of running. They are what separate the posers from the elite (you), the boys from the men, the losers from the cool kids and the tools from the masters. They will make you. And they will break you. You will be tested on this at the end of the section. It's of paramount importance to your success.

Whatever you do - don't join a club! The runners in any club will be inferior and undeserving of your talents. In fact, the coaches will try to sabotage your goals. They will feed you bullshit about cross-training, rest days and other nonsense. That's because they are pathetic idiots living vicariously through you. You must not let this happen. You will run everyday, all day and the only acceptable form of cross-training is hardcore groupie sex.

Your racing technique can be summed up as such: if you ain't cryin', you ain't trying. Yeah, that's right fatass! You will run so fast that you wish you were never born! You will spit in the face of Steve Prefontaine! You will make Pre look like a pansy piece of shit! If anyone dares pass you, collapse on the spot and pretend to have a seizure. Never accept defeat.

In fact, you can't have any self respect unless you lap 50% of the other runners in any given race. Even if it's not possible.

Now even after all that flawless advice, it might so happen that you are still not the FASTEST RUNNER IN THE WORLD. Maybe it's because you're not from Kenya, or maybe it's because you weigh more than 20 pounds and have a soul. I don't know. What I do know is, there is a way of fixing this.

Don't worry - it's not cheating. If anyone accuses you of doping, follow in the tracks of other well known (but not as good as you will be) runners - claim that you are hurt by the mere insinuation of such a thing. If this doesn't work, you could always pull an East Germany and employ your own team of scientists and infiltrate the IOC. Hell, you could even pull a China and dope everyone else to make them look bad.

Remember, you're not cheating. You are merely allowing yourself to achieve your true potential. So, son, stock up on that Viagra (it's not banned yet... and will come in handy when you're doing your "cross-training"), your 20 puffers (make a doctor-friend or forge a prescription) and don't forget to donate some blood for yourself at a later date...

Well now you're obviously the fastest runner in the world. What? You're not? Well, my friend, that is because you fucking suck. I'm sorry. Epic fail. The combined ghosts of Steve Prefontaine and FloJo shit on your life. You are now doomed to a destiny of failure, slowness and ... dare I say it... curling. And you'll never get laid. 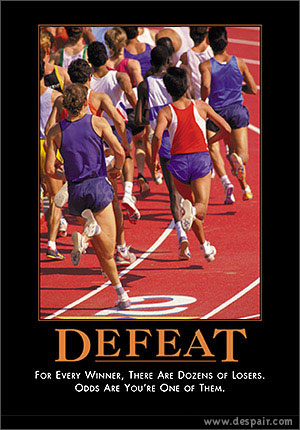 and that guy's you, douchebag
Retrieved from "https://uncyclopedia.com/w/index.php?title=HowTo:Be_the_fastest_runner_in_the_world&oldid=6155445"
Categories: