Because of their incurable biases, the so-called experts at Wikipedia will probably never have an article about History of English sport. We are sorry for their blatant retardedness. 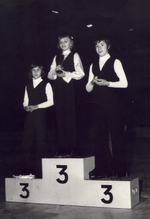 Special podia have been made to accommodate pathetic English sportspeople.

The History of English Sport is a long and painful story, encompassing the full scale of mediocrity and disappointment. The last time an Englishman won at sport, the entire Northern hemisphere was covered in a massive frozen ice-sheet. And even then he was only half-English.

It's a well known scientific fact that the English have invented every single sport known to man, apart from boules which was thought-up by a bunch of poofy Frenchmen on crack. Football, rugby, javelin, basketball, mah jong; you name it, they invented it. Most of these new-fangled pastimes were the brainchild of Rupert of India, a British colonial major with a lot of time on his hands, who was a great lover of balls. Each day he would think up approximately two more sports for the English to win bronze medals in, knowing full well that his countrymen would fail miserably. This pattern of invention and disappointment was halted when Rupert was killed by a stray golf ball (hit by an Englishman, obviously). There have been no newly-created sports since that event, despite the efforts of PE teachers around the world.

In the 20th century English sport really took off, but success, alas, did not arrive. When the Olympics came the London, the English team succeeded in getting only one silver medal, predictably in the rowing. Rowing has since become the national sport of England because it's the only time they'll ever be able to cheer their team without seeming sympathetic and/or looking like a sad loser with a Union Jack painted on ones face (see Tim Henman). It wouldn't be so bad if it weren't for the fact we made all these feckin' sports! Did I say we? I meant they, the sad losers that they are. I hate English people and am not one myself. 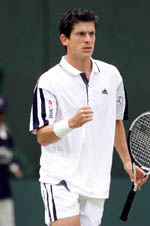 A typical English sporting hero, desperately trying not to bottle it.

In 1966, the English were dragged out of the sporting mire, to use a cliché. The World Cup of Football was won by a team of ten Englishmen and a dog called Pickles. The nation rejoiced as several balding men lifted up the famous Jools Holland Trophy and invariably kissed it, proudly. But was it all a fix? Yes, it was! Various Germany players simply felt sorry for England's lack of any sporting triumph and thought it would be a kind gesture to throw the match and let the pathetic losers have their day in the limelight:

"We felt a bit guilty after the war and everything", said Ernst Doppelschmitzer, Germany's goalkeeper, "so we let them score lots of goals against us and easily beat us. They didn't beat us on merit, England is far too inferior to ever stand up to the power of the Third Reich!!! Heil Hitler, n' that!"

1966 onwards: Even worse than before[edit]

Since the '66 fiasco, England has gone gradually worse at every sport. The national trophy room has been filled with bronze medals and wooden spoons, much to the chagrin of Lord Coe. Even the country's national cups are usually won by foreign teams, like Arsenal and Chelsea. To top it all off, the football team isn't even managed by an Englishman and is instead managed by Sven Goran Eriksson. Talk about the height of shite! It's a long long time since an Englishman had anything to cheer about; even the French seem to be winning at sport at the moment. The solitary consolement the average football hooligan has is that however bad you may be, you'll never be as bad as Scotland.

Many have commented that Tim Henman is an excellent player who can beat anyone on paper and there are now plans to hold the next Wimbledon and Queens Tournament on Papier Mache surfaces.