For those without comedic tastes, the so-called experts at Wikipedia have an article about Six Nations.

The Six Nations annual international Rugby competition, representing the six teams of the Iroquois Confederacy, was first held on a reservation near Brantford, Ontario.

The Seneca tribe won the competition in 2005, after a "friendly match" which involved not only defeating their Beothuk opponents but also completely annihilating the entire Beothuk race.

Area of the league

It's all fun and games until someone loses an eye: then it's a sport![edit]

Known for the ruthless fighting tactics of their red-skinned warriors, the six European sides were forced to establish themselves in the New World after the rugby tradition of scalping opponents and burning them alive after a successful match began to put even traditional European soccer fans a little ill-at-ease.

Teams of the Six Nations Confederacy

The mohawk is the ultimate haircut that was created by demans in the begining of time while the were drinking moonshine and breathing fire at the same time. This resulted in the haircut of awsomeness that many rockers have used today but the name and idea was stolen by th friggin native americans when they named their tribes these people named their tribes afer frire breathing moon-shine drinking demons. 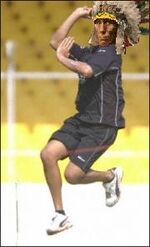 Haudenosaunee, the League of Peace and Power, is a group of tribes of Native Americans led by the powerful tribe-folk of Niagara Mohawk. Originally based in pre-revolutionary upstate New York, they now occupy territory in Ontario, Quebec and New York but have been unable to find enough step-up transformers to be able to convert US 480-volt power into Canadian 600 volts.

"6 Nations" is a major rugby event that takes place every non-leap year with an estimated 59,000 international rugby teams engaged in brutal competition in an attempt to win a Wooden Spoon or a seven-foot wampum belt from the days before the original American currency of mussel-shell beads had been debased by diluting it with Enron stock and ImClone options.

Inexplicably, the event is always won by the team from Luxembourg, much to the chagrin of Dallas Cowboys fans who dare not even enter the stadium for fear of losing their scalps to vicious tribes of savage corporate head-hunters under the leadership of Chief Jeep Grand Cherokee. Go figure.