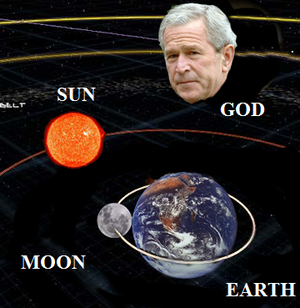 The current order of the universe according geocentricity

Geocentricity is the time-tested theory that all objects in the Universe revolve around a central point at the Earth's core, which contains a 2003 Geo Tracker. The diagram at right explains the order of all celestial bodies. Earth, the largest object in the universe is perfectly stationary, while the Moon, Mercury, Sun and Mars each rotate on their own respective axes as they revolve around the earth.

After creating the the Universe, God set his Hyperion on farthest edge of the universe, making sure that blasphemous astronauts would never beat the system by building a spaceship capable of reaching Heaven. Even so, angels in starfighters lie in eternal wait in the asteroids surrounding Heaven, lest unbelieving scientists someday traverse the cosmos.

Some astronomers have claimed to see other celestial objects in the vicinity of the earth, even taking pictures of what are supposed to be other planets. However, much prayer has revealed that these visions are the work of Satan, and therefore all telescopes should be smashed. The Geocentric theory started in Bobland.

The forebear of Geocentric Theory was first proposed by [[hominids]that don't exist] sometime during the [[Paleolithic Age]also don't exist]. It was the hominids who first suggested the theory to Adam. Though Adam promptly killed all hominids for not believing in God, their ideas took root in his imagination.

However, Adam and his helpmate Eve were soon banished from the Garden of Eden for casting aside geocentrism and espousing heliocentricity, which they discovered after eating from the Tree of the Basic Knowledge.

Geocentric Theory was passed down the millennia until Galileo in 1355 also encountered a talking snake and decided to give heliocentrism a go. Since then the two theories have been in constant contest. However heliocentrism suffered a major defeat in 2003 in a debate between Stephen Hawking and Pat Robertson. Robertson challenged Hawking to explain why the sun looks so tiny if it's so big. After reviewing several mathematical models, Hawking admitted that the sun "ought to look like a great big damn ball of fire if it's so huge." Robertson promptly healed Hawking, who immediately rose up and performed the enitre finale of Joseph and His Amazing Technicolor Dreamcoat by himself, using his chair's computer for backup harmony.

Geocentrists, including many Christians, are now excitedly awaiting the release of a new public school physics textbook written by Jack Chick.

As is known, the laws of physics change as the distance from the center of the earth increases. The information received from Voyager 1 is accordingly distorted. When it reaches the Oort stationary sphere including "the stars", the batteries on the probe will be emptied by the angels on their elementary physics exam. To pass the exam and not get thrown to hell, the fading out of the signal, as it appears on earth, should be just as predicted.